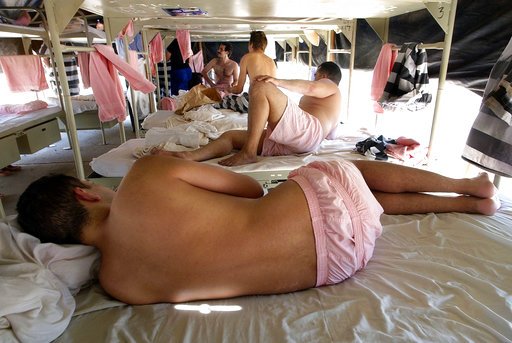 File - In this Wednesday, July 23, 2003, file photo, inmates sleep in county issued pink boxer shorts at the Maricopa County Jail's Tent City in Phoenix. Inmates live outside year round in tents outside due to overcrowding in the county's jails. Newly elected Maricopa County Sheriff Paul Penzone announced Tuesday, April 4, 2017, that he will be closing the facility in the coming months. (AP Photo/Matt York, File)

The decision by Sheriff Paul Penzone to close the 24-year-old Tent City complex will undo a critical piece of Arpaio’s political legacy. He is already phasing out Arpaio’s signature practice of making inmates wear pink underwear.

“This facility became more of a circus atmosphere for the general public. Starting today, that circus ends,” said Penzone, who plans to move half of Tent City’s inmates to other jails within 45 to 60 days and complete the closure within six months. 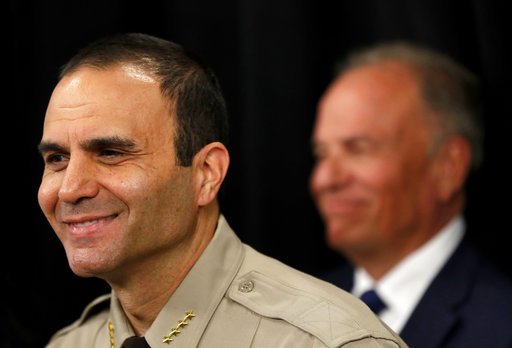 Despite the complex’s reputation for being a miserable place to serve time, Penzone said most inmates preferred the outdoor setting over 6-foot-by-8-foot indoor cells and instead were able to move around freely within the complex and spend time in a nearby air-conditioned room.

Arpaio opened Tent City in 1993 as a way of easing jail overcrowding. The barbed-wire-surrounded compound was part of a broader campaign by Arpaio to enact get-tough measures in his jails, such as banning cigarettes, creating inmate chain gangs and dressing them in old-time striped prison uniforms.

The tents were popular among voters who believed jail is supposed to be a difficult place to live.

Critics said the complex was a way for Arpaio to garner media attention and contributed to a culture of cruelty within his jails.

Grant Woods, a former state attorney general who led a committee that recommended Tent City’s closure, said the complex reflected poorly on people living in metro Phoenix. “The rest of the country thinks we are that sort of person who would abuse and humiliate prisoners and put them in such harsh situations,” Woods said.

Arpaio, in an interview after the closure decision was announced, insisted that inmates found the complex to be a harsh place. He said he wasn’t upset that his successor was reversing a key part of his legacy. “I didn’t do it for legacy,” said Arpaio, who was beaten by Penzone in November after six terms in office.

The complex jailed 1,700 inmates at its peak, but in recent years only 700 to 800 people were housed there. Penzone said the closure will produce $4.5 million in savings annually. He said prisoners will not be set free as a result of his decision and instead will do their time in the county’s other jails, which have enough room for them. 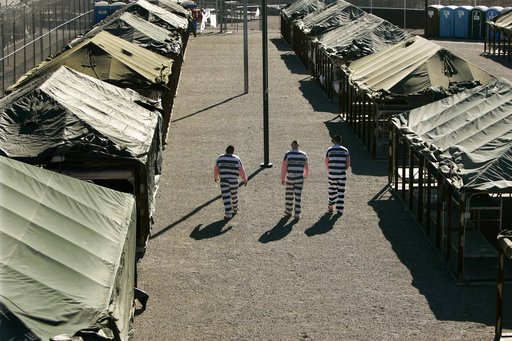 FILE – In this June 23, 2012, file photo, inmates walk through the courtyard in Maricopa County Sheriff Joe Arpaio’s tent city jail in Phoenix. Newly elected Maricopa County Sheriff Paul Penzone announced Tuesday, April 4, 2017, that he will be closing the facility in the coming months. Arpaio opened the complex in August 1993 as a way of easing jail overcrowding. (AP Photo/Charlie Riedel, File)

Tent City was the location of a 1996 riot by hundreds of inmates. They armed themselves with poles from their tents, set fires and took several jail officers hostage. Eight officers were injured.

Arpaio touted the tents as a cost-saving measure, but the tents provided Arpaio with fodder for countless news releases and TV interviews over the years.

Tent City also was a fixture in Arpaio’s stump speeches.

In a 2009 address to an anti-illegal immigration group in Texas, Arpaio reflected on TV crews that came from across the world to shoot footage of Tent City. He said he came up with the idea of hanging a thermometer in Tent City so reporters could see he wasn’t lying about the heat.

“Actually, there’s a trick. If you go higher and hit the canvass, you gain about 20 degrees,” Arpaio said, drawing laughter from the crowd when he explained that the ploy raised the temperature reading to 142 degrees.

Even though Arpaio insisted the complex was safe and run smoothly, Tent City was a regular target of criticism.

A jury awarded a $948,000 verdict in favor of Jeremy Flanders for a permanent brain damage he suffered in 1996 when several hooded inmates pulled him from his Tent City bunk as he was sleeping, kicking and hitting him.

One witness said an inmate used a piece of steel rebar, which was used to secure the tents to the ground, to beat Flanders on the head, neck and shoulders.

A 2002 decision by the Arizona Court of Appeals in the Flanders case raised questions about the security of the complex, saying the flaps on the tents could be lifted up easily and that inmates freely roamed in and out of the tents.

The court also said fights among inmates were common and that inmates regularly got hold of banned items — cigarettes, lighters, fireworks, drugs, knives and food — that were sneaked into the complex by people who tossed them over the fences that surround Tent City.

Follow Jacques Billeaud at twitter.com/jacquesbilleaud. His work can be found at https://www.apnews.com/search/jacques%20billeaud.