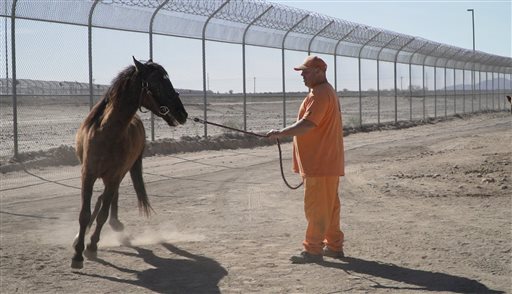 Inmates Brian Tierce works with a horse at the Arizona State Prison Complex in Florence, Ariz. He is part of the Wild Horse Inmate Program that uses inmates to tame wild horses gathered from BLM land. (Pat Shannahan/The Arizona Republic via AP)

The Arizona Republic reports (http://bit.ly/296wx1N) that the Wild Horse Inmate Program, known as WHIP, at a state prison in Florence is being credited with bringing about positive changes for participating inmates who work with horses rounded up by the Bureau of Land Management on Arizona’s public rangelands.

“What I learn from my horses is patience, love and caring, and trust,” said Dashonte Abdul Al-Wakil, who has been serving time the past 18 years for second-degree murder and drug violations. “When these horses first come in, their problem is trust. When I first come into prison, that was my problem.”

Al-Wakil is one of about 30 prisoners in Florence currently participating in the program run by Randy Helm, a 62-year-old horse whisperer and fourth-generation Arizonan who grew up on ranches. Helm tells the Republic that he first began training wild horses more than 20 years ago, and describes the process as tricky but rewarding.

“There’s a process to get there and you can’t take short cuts,” Helm said. “A lot of these guys are in prison because they circumvent the process. I’ve had guys figure that out on their own, they say, ‘I never saw anything through to that amazing, fulfilling feeling when you accomplish something that you’ve worked towards.’ ”

The sense of accomplishment that comes with seeing through a project to its end is one of the major pluses of WHIP, Helm said.

While the program has turned out to have benefits for prisoner rehabilitation, the original intent behind the collaboration between the Arizona Department of Corrections and the Bureau of Land Management was simply to create an inmate work program.

With the program still young, he said he hopes the zero-percent recidivism rate among participating inmates holds.

Information from: The Arizona Republic, http://www.azcentral.com