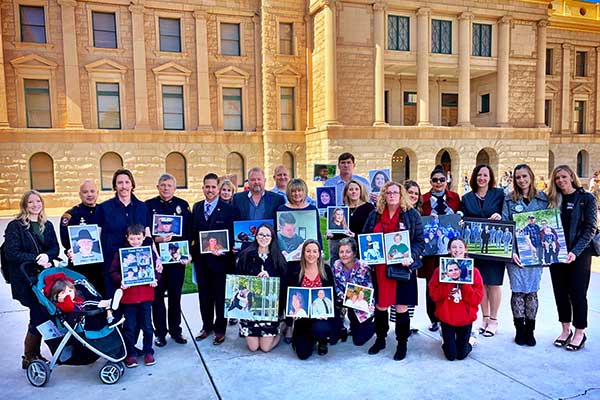 By Brendan Lyons, Executive Director of Look! Save A life

According to the most recent 2017 study by the Arizona Department of Transportation, a person was killed every 8 hours and 46 minutes in a traffic collision on our roads. Driver behavior was a factor in more than 90 percent of all crashes. With evidence of crashes and fatalities continuing to rise year after year, the question remains, “Why isn’t our Arizona Legislature doing more to better protect us on our open roads?

Prior to October 2013, I was living my dream job as a firefighter. Among my varied duties, was responding to the tragic, yet preventable crashes caused by distracted driving. My first-hand experiences compelled me to inspire a social change in behavior; launching the Arizona chapter of ‘LOOK! Save A Life’ in 2012. The mission of the nonprofit is to educate and bring awareness to all who use our public roadways of the ever-increasing dangers of unsafe and distracted driving.

Then, in a sad twist of irony, I became a statistic of this painful reality. I went for a bike ride with my girlfriend on the morning of her birthday, when a motorist traveling 45mph, looked down to see who was calling, swerved into the bike lane and struck us from behind. The incident shattered her wrist, and left me with several fractured vertebra, a fractured pelvis, and a traumatic brain injury.

It’s a strange thing, being physically fit to perform my duties as a firefighter one day, then wake up the next day, unable to perform simple tasks such as walking or going to the bathroom on my own. All because of a momentary lapse in judgement, one person’s choice, my life is forever changed and has ended a career that I loved. Following months of doctors’ appointments, physical and occupational therapy, and neurological rehabilitation, I’ve found a renewed focus as an advocate. Although I have since forgiven the man who altered the course of my life; as a survivor, I have a responsibility to use my voice on behalf of those who no longer have one.

Like so many others who have been touched by distracted driving, I’ve joined this revolution to change laws and make our roads safer. As the executive director of Look! Save A Life, we are spreading the word across Arizona that a moment’s distraction, such as a text, post or glance, can result in a lifetime of regret.

Studies continue to highlight that phone addiction has become the new ‘drunk-driving’ epidemic of our generation. Make no mistake, driving impaired is no accident. An accident is defined as something unfortunate, which cannot be avoided. A collision, on the other hand is the result of choices made and risks disregarded.

Over the years, we have encouraged state legislators for laws against distracted driving. We tell our stories in committee hearings and show the pictures of the mangled cars and beautiful faces of mothers, fathers, siblings, grandparents and children that had their futures abruptly and violently cut short. Although year after year, we’ve had great committee hearings, these bills continue to die a quiet death.

With no progress at the state level, we took our message to local governments and they responded. Cities and counties around the state are now being forced to act in the name of public safety. Now, 26 jurisdictions have passed ordinances (23 have adopted hand-held bans and 3 prohibit texting – while driving; all of which are a primary offense). This amazing progress has led to a new challenge – Arizona has a patchwork of local laws. Although some locations such as Oro Valley, Tucson and Pima County have taken a regional approach by passing the same ordinance, the time has come for a statewide ban on hand-held use of a phone while driving.

Arizona is one of only two states that has not approved a ban on texting or hand-held cell phone use. With every passing day that we wait to enact a strong law, the safety of all who share our public roads, remain at risk.

Meanwhile other states are seeing positive results from their hands-free cell phone laws. Traffic fatalities in Georgia fell 15-percent in 2018 following enactment of their law in 2017. The latest Washington Distracted Driving Safety Commission annual study found that distracted driving went from 9.2 percent in 2017 to 8.2 percent in 2018.

The time has come for Arizona to go hands-free. A recent poll by the American Property Casualty Insurance Association and AAA, found that 86 percent of Arizonans, including all ages, regions, and political beliefs support the proposed “hands-free” legislation intended to crack down on distracted driving.

Beyond making it illegal, now is the time to make distracted driving socially unacceptable. The families of those who were seriously hurt or killed by a distracted driver are pleading for help by calling your local state representatives and state senator to urge them to support legislation to require hand-free cell phone use. This is the year Arizona puts a stop to the growing epidemic and health crisis of people using their phones behind the wheel.

Brendan Lyons is the executive director of Look! Save a Life, a 501(c)(3) non-profit organization designed to raise awareness about the dangers of distracted driving.