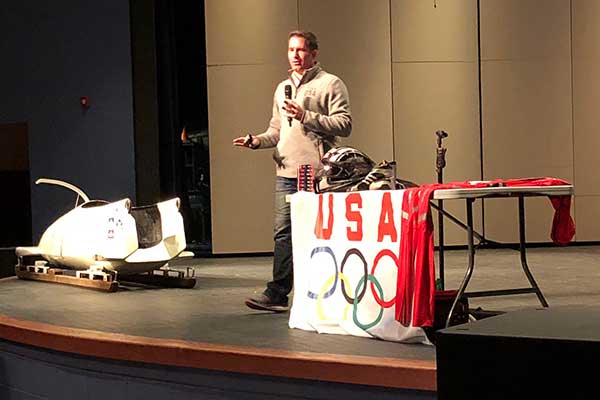 Area schools are gathering at the David M Player Safford Center for the Arts for three motivational presentations by Jeremy Holm; a motivational speaker, bobsled athlete and former head coach for the United States Adaptive Bobsled Team. Holm was introduced by Amanda Rogers who gave a brief biography of Holm before turning the presentation over to him.

Holm began his presentation by asking students if they had ever seen bobsledding. He compared the thrill of bobsledding to riding a roller coaster. Holm said that on some parts of the track the athletes feel almost six times the force of gravity.

Holm said his goal was to go to the Olympics and compete for his country. He told students that they should have a goal – something that excites them and scares them – and then have the courage to pursue it. “You can have a goal in front of you, but unless you start working for it, you’re never going to reach it,” He said

“Here’s the thing that bobsled taught me. You get to choose your attitude. You can choose to work hard, set goals and go for the gold. We’re going to talk about those four things.”

Holm then talked to students about what it takes to be a champion and reach your goals. “What you achieve is up to you,” he said. “If I choose to slack off and I don’t do well in the race, who’s fault is that?” Holmes asked. “Mine,” he answered. “Right? I can’t blame anybody else, it’s all me.”

Holm presented a unique word during his presentation and told students that the key to success was the willingness to work. “Sweatosis,” he said, “is the scientific process by which sweat is turned into gold medals.

Holms encouraged his audience to have a positive attitude and look for the good. “If you can’t change your circumstances, You can always change your attitude.”

Jeremy is the author of the books, The Champion’s Way & Fire on Ice, the founder of the Athlete Outreach Project, team captain for Team Phoenix Bobsled, and assistant to the Utah chapter of the U.S. Olympian Alumni Association & a spokesperson for numerous non-profit organizations and groups.

Throughout his many careers, Jeremy has used his example and voice to champion many causes, including working to eliminate the stigmas surrounding mental illness and suicide.