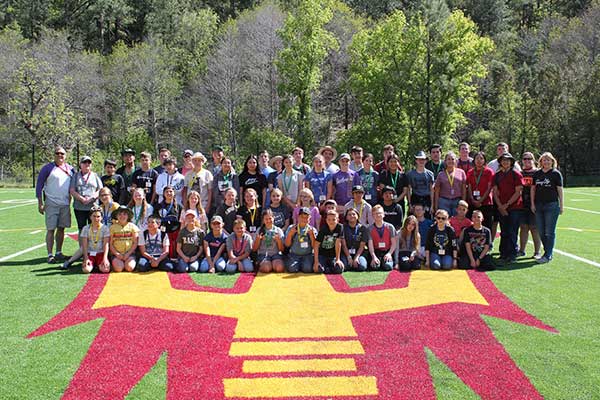 After arriving at Camp Tonto Creek, the students were divided into three groups. One group headed off for an Ecology Hike, where students used their senses to make observations of the organisms that survive in the forest ecosystem and how their structures and behaviors increase the chances of survival. Another group learned the fundamentals of archery with an emphasis on safety and self-discipline for proper technique. They learned why the design of the bow and arrow work for precision through design and physics concepts. The third group learned how different types of rocks are created and how canyons are formed.

Each evening the three groups rotated through STEM activities prepared by the adult leaders. Phil McBride had the participants build a car powered by a rubber band or a mouse trap.  Paul Anger led an astronomy discussion while viewing the beautiful night sky. Becky Booth had participants conduct electrophoresis experiments.

After one STEM activity rotation on Wednesday morning, the vans were loaded for a field trip to view what is believed to be the largest natural travertine bridge in the world, the Tonto Natural Bridge, which stands 183 feet high over a 400-foot long tunnel that measures 150 feet at its widest point. The campers ate a sack lunch at the park and enjoyed an afternoon hike to the bottom of the natural bridge where they were able to spend time cooling off in the water pools. Thursday evening was spent playing games on the new artificial turf football field at Camp Tontozona. Campers played Frisbee, volleyball, and football. One of the highlights was Knockerball bouts, where campers competed against each other to knock their opponent of his/her feet.

Camp participants spent Thursday participating in additional STEM activities, including Wilderness Survival where they learned about water purification and how to survive in the wilderness. Participants worked together as a group to overcome challenges in the Low Ropes Course. They developed team building and leadership skills that will benefit them for the rest of their lives. They also learned about solar energy and designed a prototype of an amusement park ride that could be run using a solar cell.

On the last evening, all campers joined together for a campfire program where Dr. McBride spoke of his experience being separated for two nights in the wilderness in Northern Arizona with another scout and a blind man. He described how they had to trust and rely on each other to find water and then bring it back to the blind man, not knowing when they would be found. Paul Anger related the story of James Lick and how he persuaded his friend and neighbor from Peru, Domingo Ghirardelli, to come to California and get into the chocolate business. Paula McBride and Tawnie Anger led the group in camp songs. A few special awards were presented, including the outstanding camper award presented to Peter Green. Campers spent the last few minutes cooking marshmallows and making S’mores.

A special thanks to Lewis and Becky Booth from Duncan, Ethan McBride from Safford, Paula McBride from Thatcher, Heather Dillman from Ft. Thomas, and Paul and Tawnie Anger from Pima, who served as chaperones and staff during the week. Dr. McBride noted, “It was great to see the participants make new friends, overcome challenges, and work together as a team while learning about science, technology, engineering and math.”

For further information about summer camps or STEM activities in your area, or to learn how you can receive funding for a STEM project from the Graham Greenlee Rural Activation Innovation Network, contact Phil McBride, Dean of Instruction at Eastern Arizona College (928-428-4804) or Paul Anger, Director of the Eastern Arizona College Discovery Park Campus (928-428-6260).