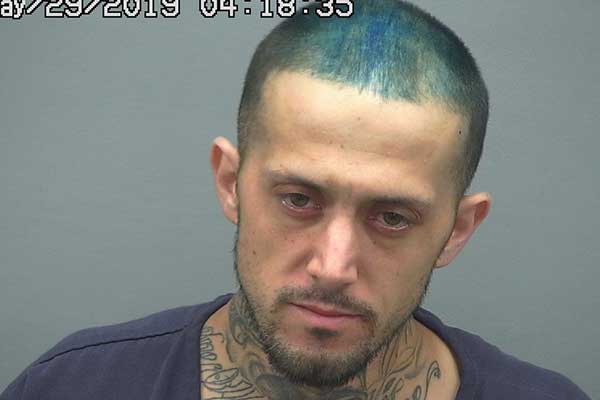 SAFFORD – Last Tuesday, authorities were called to the area of 7th Street and 8th Avenue due to the report of a man, identified as Anthony Garcia, and his girlfriend being in the area and possibly armed with knives. It had been reported Anthony Garcia along with Richie Garcia had assaulted a man a couple weeks prior, however, Anthony had fled the scene before police arrived.

Anthony had been pointed out to police as he was pushing a woman in a wheelchair on the sidewalk. It was later discovered that the woman was uninjured and had no need for a wheelchair. The officer shined a spotlight on the two, which they ignored and continued down the sidewalk. Even after the officer activated his emergency lights the couple continued to walk for a short distance before stopping.

The officer noticed Anthony digging around in the pocket of his sweatshirt which seemed abnormal and would not face the officer when spoken to. When the two were asked about having knives, the woman stated she had a pocket knife and she was asked to place it on the ground. Anthony was asked about having syringes, which he denied. However, a syringe was located in his pocket and Anthony was placed in handcuffs for possession of drug paraphernalia. He was then placed under arrest for an outstanding warrant that had been confirmed by dispatch.

When everything was being removed from Anthony’s pockets before being placed in the patrol vehicle, a plastic baggie containing a dark chunky substance fell out of his pocket onto the ground. Anthony reportedly stepped on the baggie, so the officer pushed him back to prevent him from destroying evidence. Later the substance tested positive for 2.8 grams of heroin.

There was also a black bag located on the wheelchair. The woman reportedly told the officer that there was nothing illegal inside. Anthony reported the bag belonged to him. After searching the bag, inside several empty plastic baggies and syringes were found. Anthony was transported to the Graham County Jail and booked on the warrant, possession of drug paraphernalia and possession of a narcotic for sale.