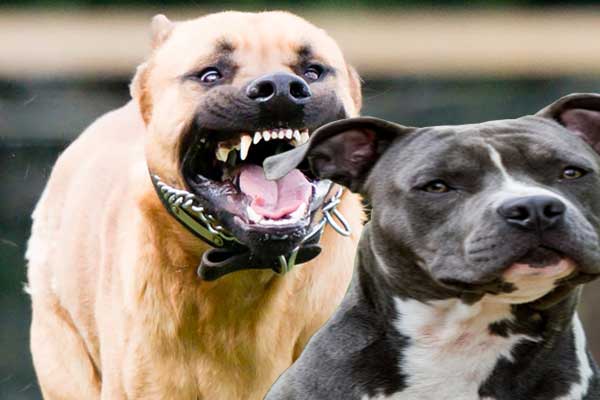 For illustration only. Not the actual dogs.

SAFFORD – On Thursday, authorities were dispatched to a residence on 27th Street around 1:15 am in reference to a man that had been attacked in his yard by his neighbor’s pit bull dogs that were running loose. When officer’s arrived, they found the victim bleeding as he laid in the bed of his pick-up truck. The officer’s were unable to get out of their patrol vehicle due to the aggressive nature of the dogs. An officer turned the patrol vehicle around and started following the dogs, attempting to usher them back to the residence, known to them through previous contact, as the owner of the dogs. The officer called the owner on the cell phone to inform her of the incident and to help with securing the dogs. The owner came out to help with the dogs but was upset that the dogs had gotten out of her yard and attacked her neighbor.  She stated the dog’s behavior had progressively gotten worse and had become more aggressive since receiving rabies vaccinations. She requested the dogs be removed from the home and euthanized.

After the area was safe, Lifeline moved in to provide medical attention to the victim for the numerous injuries to his arms, legs, and throat. The victim was transported to Mt. Graham Regional Medical Center where he received multiple stitches for his wounds. An officer spoke with a witness who was up playing video games when he heard dog’s barking outside his home. When he looked out the front door, he could hear the victim yelling and saw him on the ground. The witness stated he attempted to exit his residence when one of the dogs ran towards him. The witness had his wife call 911 while he got dressed to go outside. The witness then saw the victim break away from the dog attack and retreat into the bed of his truck where he stayed until police arrived.

Animal Control arrived and the owner’s grandchildren assisted with loading the dogs into the vehicle. One of the dogs had been court ordered on June 26, 2018 to be picked up. Animal Control had attempted several times to make contact with the owner to pick up the dog but was unable to make contact. According to the police report, the dogs are at the pound until the court orders the dogs to be destroyed.