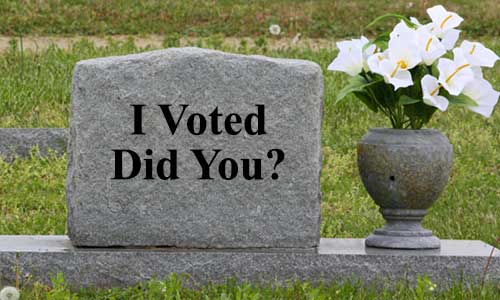 ATLANTA (AP) — Donald Trump has repeatedly warned of a “rigged” election, saying large-scale voter fraud is happening in the U.S. and suggesting it will affect the outcome of this year’s presidential race. There is no evidence that such widespread fraud exists.

Trump’s comments have alarmed voting rights experts and civil rights groups, who say they threaten to undermine faith in the nation’s elections. Meanwhile, House Speaker Paul Ryan and other Republicans are expressing confidence in the voting systems, while state election officials are saying they are committed to conducting fair and impartial elections.

It’s worth noting, too, that 29 of the nation’s secretaries of state are Republican.

Here’s a look at what Trump has been saying, along with historical data about voter fraud and what this could mean for Election Day.

WHAT TRUMP HAS SAID

In recent weeks, Trump has repeatedly raised questions about the integrity of the nation’s voting systems and called for his supporters to monitor polling places in “certain areas” to guard against voter fraud. He’s made the comments during campaign stops in battleground states such as Michigan and Pennsylvania, singling out Philadelphia as a city to watch.

Recently, Trump sent a series of tweets in which he called Republican leaders “naive” for dismissing his claims of widespread voter fraud and saying the election is being rigged “by the dishonest and distorted media” for Democrat Hillary Clinton.

Trump’s supporters appear to share his concerns. A poll last month by the Associated Press-NORC Center for Public Affairs Research found half of all those with a favorable opinion of Trump said they have little to no confidence in the integrity of the vote count.

IS VOTER FRAUD A WIDESPREAD PROBLEM?

No. While there have been isolated cases of voter fraud in the U.S., there is no evidence of it being a widespread problem as Trump suggests.

The type of fraud that Trump appears to be talking about would involve people casting ballots who know they are not eligible to vote, as well as people impersonating others to cast ballots for their preferred candidate. Experts say this would be an inefficient way to rig an election, given the fraud would have to be conducted one voter at a time, and would only be effective in places where the race is close enough that the outcome could be swayed.

Studies have shown voter impersonation to be quite rare. In one study, a Loyola Law School professor found 31 instances involving allegations of voter impersonation out of 1 billion votes cast in U.S. elections between 2000 and 2014. Another study by the Brennan Center for Justice at New York University Law School found many reports of people voting twice or ballots being cast on behalf of dead people were largely the result of clerical errors that suggested wrongdoing when none had occurred.

“Voter fraud is so incredibly rare that it has no impact on the integrity of our elections,” said Wendy Weiser, head of the democracy program at the Brennan Center. “You are more likely to be struck by lightning, more likely to see a UFO, than to be a victim of voter fraud.”

In Philadelphia on Monday, Republican election commissioner Al Schmidt dismissed the idea that election fraud could take place in the nation’s fifth-largest city. “The real threat to the integrity of elections is irresponsible accusations that undermine confidence in the electoral process,” he said.

Other types of fraud are possible, such as voting machines being intentionally manipulated to report false results. So-called “ballot stuffing” would be considered election fraud, rather than voter fraud, because it would be orchestrated by someone involved in administering the election or someone who has gained access to the election administration system.

Experts say federal elections would be much more difficult to influence this way because of the broad, decentralized nature of the nation’s voting systems. There are more than 9,000 election jurisdictions and hundreds of thousands of polling places.

That also holds true for any effort by hackers to influence this year’s presidential election. Experts say it’s unlikely a hacker could change votes, but one might be able to delete voters from registration files, triggering confusion and long lines at the polls.

WHAT MEASURES EXIST TO GUARD AGAINST FRAUD?

State election officials have several measures in place to protect the integrity of their voting systems, and both political parties have a vested interest in making sure the outcome is fair.

Voting machines are not connected to the internet, and the vast majority of ballots will be cast on systems that allow for a paper record to verify electronic results.

The process of counting the votes is not done on systems connected to the internet, and tabulation systems are not connected to a single network, according to the National Association of Secretaries of State.

As in past presidential elections, individual campaigns, political parties and special interest and civil rights groups will have operations designed to assist voters and monitor for any problems at the polls.

There have been efforts in recent years, largely in Republican-led states, to pass laws requiring voters to show photo identification at the polls. Supporters say such laws are needed to combat voter fraud, while critics argue the laws disproportionately affect minorities and the poor who may face challenges obtaining a government-issued photo ID.

Courts have recently agreed. In striking down parts of a voter ID law in North Carolina this year, a federal appeals court judge wrote they “target African Americans with almost surgical precision.”

The courts have also largely found there is little documented evidence of voter fraud. In a decision finding Texas’ photo ID law was discriminatory, a federal appeals court noted there were two convictions related to in-person voter fraud out of 20 million votes cast in the decade before the law was enacted.

Experts note that fraud, when it occurs, usually involves absentee ballots or voter registration — problems that could not be solved by requiring an ID at the polls.