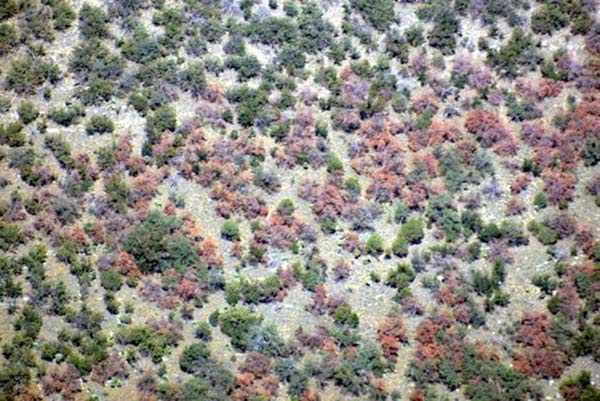 Forest Service officials attribute the problem to increased stress due to extended drought and other effects of climate change. Sandy Bahr, executive director of the Grand Canyon Chapter of the Sierra Club, said another factor is that elected officials refuse to deal with climate change.

Forest Service scientists say drought weakens trees, which are then killed by infestations of bark beetles and other insects. Most of Arizona has been in a continuous drought since 2009, with no relief in sight.

Bahr said she thinks forest managers should return to a program of proscribed or controlled burns to help preserve the state’s woodlands.

“Fire helps to thin out the smaller trees that help to promote growth of grasses, and you will get a healthier forest overall,” she said. “And so, fire exclusion has had an impact on the forest.”

She said the long-term solution is to significantly reduce carbon in the atmosphere and the effects of climate change.

“There are a variety of things that we can do, but overall, we need to deal with climate change,” Bahr said. “So, whatever we can do to minimize other stresses on the forest needs to happen.”

Federal officials conducted aerial surveys of more than 12 million acres of Arizona’s national forests, as well as state, tribal and private land. The agency plans a ground survey of the affected areas and a more detailed report later this year.