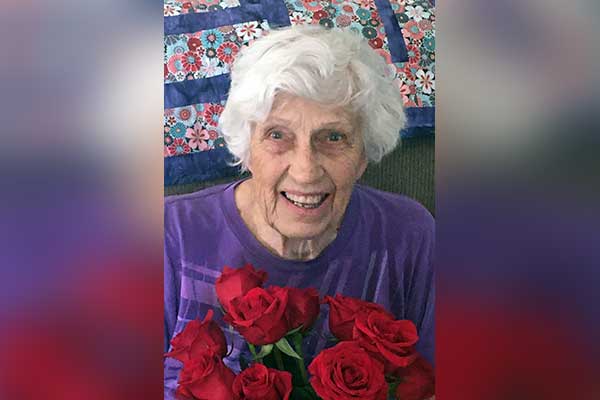 Adeline Addie” Lucille Shelton was born March 14, 1930, to Emil & Esther Zahrt in Wausau, Wisconsin. She was baptized in Zion Lutheran Church and attended Zion Lutheran School for eight years. She graduated from Wausau Senior High School and attended the University of Wisconsin at Wausau for two years. She met Frank Shelton in 1949 in Highland Park, Illinois, and they were married in June 1950. In July 1951, the family moved to Douglas, Arizona, and later in the year to Safford, Arizona .

Addie has been active in Grace Lutheran Church since 1951 and in various organizations throughout Safford for many years. She was employed at Haralson’s Tire Company for 51 years, full-time and then part-time after retirement.

She is survived by children: Anne White (Terry) of Tucson, Bill Shelton (Victoria) of Aurora, CO, John Rocky (Marta) and Barry of Laveen, and Kaye Congdon of Safford. She is also survived by a brother, Herbert Zahrt, three sisters, Lillian Engebrecht, Marion Zahrt, and Eleanor (Edward) Martin all of Wausau, Wisconsin, and 15 grandchildren and 28 great-grandchildren.

She was preceded in death by her parents, three brothers, two sisters, a daughter-in-law (Linda Shelton) and son-in-law (Mark Congdon).

Addie requested that donations be made to “Mission To The Children” (missiontothechildren.org) or Grace Lutheran Church, 225 West Main, Safford, AZ, instead of flowers. Addie wanted everyone to know, “ I look forward to meeting my Savior, who loves me and died for all sins. Do not sorrow, Rejoice that I am no longer in this world filled with sin and its consequences.”