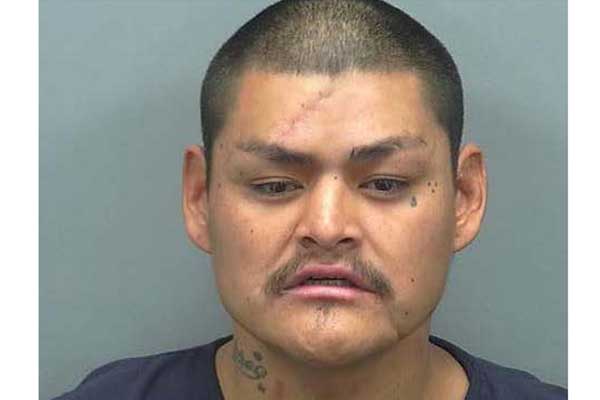 An altercation between a man and a woman as they walked down highway 70 culminated in the arrest of the man. Mario Sanchez was arrested on two outstanding warrants: One out of the Safford City Court and the other out of Graham County Superior Court.

According to the police report two people called in to report an apparent altercation between a man and a woman walking on the sidewalk on the south side of Highway 70. One of the reporting parties said that he was passing by Pizza Hut when he witnessed the man punch the woman in the face. He said that it knocked the woman out onto the highway and that he was worried she might end up in oncoming traffic.

A second witness reported that they saw the pair walking together in front of Little Caesars and saw Sanchez with his arms out, trying to force the woman in the direction he wanted her to go. The witness said that it looked like she did not want to go with him and that she was clearly upset.

Police officers caught up to the pair around the intersection of Highway 70 and 20th Avenue. They separated the couple and questioned them individually. The woman told police that she and Sanchez were arguing because she wanted to go in one direction and Sanchez wanted to go in another. When the woman was informed that two witnesses had reported that Sanchez had assaulted her, she said that she was scared and didn’t want to get anyone in trouble. When asked if she was assaulted, she paused, and then answered, “no.” When pressed for more details the woman apparently told police that she didn’t want to get anyone in trouble and that she would get beat up if she said more.

Sanchez said that he and the woman were walking down the sidewalk trying to decide which way to go. He claimed that was all that happened. When told that two people had reported that he had assaulted the woman, he said that all he had done was grab her as she tried to walk away and tried to get her to go with him.

Even though neither party to the incident would talk about it, a report was sent to the City Attorney for possible charges of assault, disorderly conduct and false reporting on the part of Sanchez.

Sanchez was ultimately booked on the two outstanding warrants.