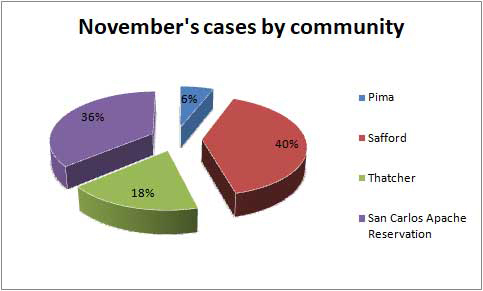 Graham County Health Department announced the new cases Thursday. Sixteen of the latest cases involve residents of Safford, while six are in Thatcher, four on the San Carlos Apache Reservation and three in Pima.

The Safford area has seen most of the cases thus far in November, with 126 residents testing positive. The Graham County portion of the San Carlos Apache Reservation is next with 114 cases, followed by Thatcher with 57 and Pima with 19. There have been no new cases reported yet in Fort Thomas this month.

Graham County’s total number of cases is now at 1,562, which means 4.02 percent of the population has tested positive since the start of the pandemic.

According to Arizona Department of Health Services, Graham County has a positivity rate of 16.4 percent and has a rate of 309 cases per 100,000 population.

Greenlee County also reported new cases for the third day in a row and seventh time this month.

That brings Greenlee County’s total number of cases to 128, which means 1.35 percent of the population has tested positive since the start of the pandemic.

AZDHS reports Greenlee County’s positivity rate is 22.7 percent and the county has a rate of 29 cases per 100,000 population.