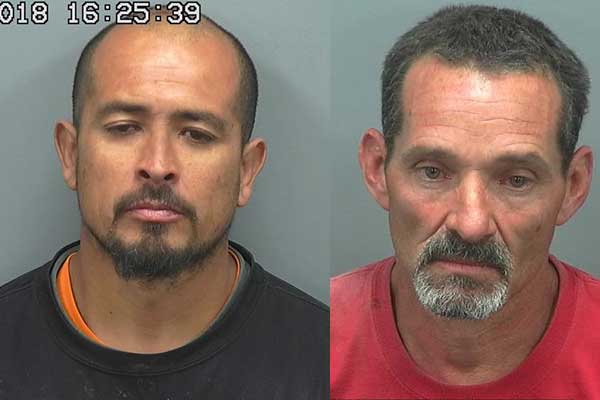 SAFFORD – After pulling into the parking lot of a local convenience store on Monday afternoon, a Safford officer ran a records check on a license plate that belonged to Steven Wimberly, whom was confirmed to have a felony warrant for his arrest.

The officer approached the vehicle and saw Wimberly seated in the driver’s seat. A male passenger attempted to exit the vehicle but was advised to stay seated. The man identified himself as Gregory Roybal Moreno. Wimberly was asked if he knew that he had a warrant for his arrest and he replied that he did know. Wimberly was handcuffed, searched and placed in the patrol vehicle. When he was asked if the officer could search the vehicle, he denied consent.

The investigator conducted a record’s check for Moreno that showed he also had an arrest warrant. The officer informed Moreno of the warrant and asked him if he was in possession of anything illegal and he stated that he had some marijuana inside of his pocket and told the officer that he did not have a medical marijuana card. Moreno was also placed into handcuffs and searched. The investigator recovered a small rubber container which contained a green leafy substance the officer recognized to be marijuana from Moreno’s pocket.

A second officer arrived to assist supervising Moreno while the first officer spoke with Wimberly about whether there was anything illegal inside of the vehicle. Wimberly sat silently and did not answer at first but then responded that there was a meth pipe in the center console and “a bag of dope in a cigarette pack”.

After Wimberly was read his rights, he was asked if the meth pipe and the methamphetamine in the cigarette pack were his, and he stated that they were his. When officers searched the vehicle, they found a red pack of cigarettes on top of the center console. Inside the pack of cigarettes they found a white crystalline substance in a plastic bag that the investigator recognized as methamphetamine. Inside the console, the officer found a glass smoking device with a white residue wrapped in toilet tissue.

Located on the center seat and underneath the center console was another empty package of cigarettes that had a glass smoking device emitting the odor of burnt marijuana.

The officer asked Moreno if the marijuana pipe was his to which he replied that it was. Moreno was transported to the jail for his active warrant.