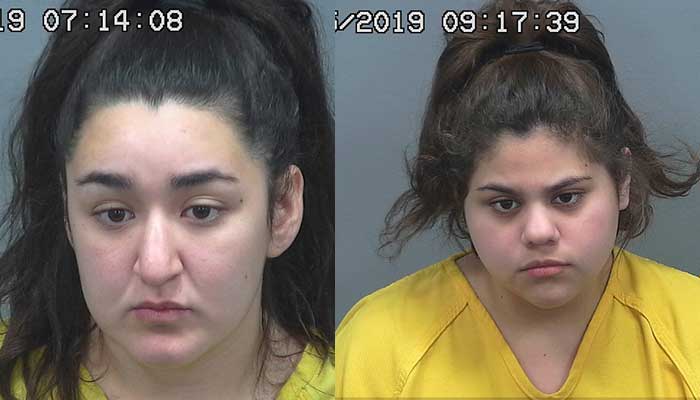 Safford police arrested two women on Saturday for disorderly conduct after the two had apparently been threatening each other over several days.

Authorities were dispatched to El Paso Boulevard in Safford in reference to a fight taking place. When officers arrived they found a group of women standing near a truck stopped on the wrong side of the road. The driver’s side window was shattered and a woman, identified as Alexis Felkner was holding a baseball bat. Authorities instructed Felkner to put the bat down, but she started yelling at another woman, identified as Sabrina Palma. As the officer was detaining Felkner and walking her away, Palma came toward them threatening Felkner and yelling loudly. The loudness of the disturbance had brought curious neighbors out to see what was happening.

Other officers arrived on the scene and Palma was handcuffed. Both women continued to argue and threaten each other so they were placed in separate patrol vehicles. Even after being separated, they continued to yell loudly.

One of the women at the scene told authorities that she and Palma had been driving around looking for Palma’s brother when she suddenly jumped out of the truck and started arguing with Felkner. Bad feelings had been brewing between the two women since Palma had allegedly gotten involved with Felkner’s boyfriend. The altercation was a carry over from a previous encounter the two women had in the Walmart Parking lot several days earlier, when their common boyfriend called Palma and asked her to meet him in the Walmart parking lot. When she got into his car, Felkner allegedly grabbed her hair from the back seat and started punching her. When she started defending herself, the alleged boyfriend apparently pushed her out of the car and drove away. Felkner was cited for assault and released, but the bad feelings between the two women continued to escalate. According to the police report, both women continued to threaten each other after the earlier incident.

Felkner told police that Palma was throwing rocks at her house on Saturday so she came out with a bat to chase her off. She admitted to breaking the truck window with the bat. Felkner was arrested and charged with disorderly conduct and criminal damage.

Palma was also arrested for disorderly conduct. When an officer asked her if there was anything she wanted to add to her statement she apparently said that she wanted revenge for the incident a few days prior and was going to get Felkner even if she had to go to jail for it.

Both women were booked into the Graham County jail.