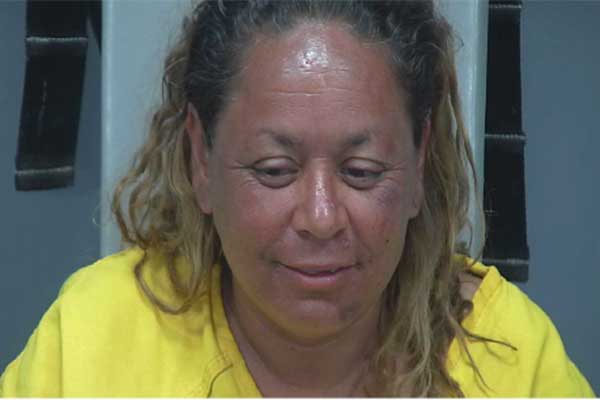 SAFFORD – An officer was dispatched to Walgreens on Sunday for a welfare check on a male and female in the area. When the officer made contact with one of the individuals, the woman identified as, Jenny Garcia, was reminded that she was trespassed from Walmart, because it appeared to the officer that Garcia was walking in that direction. The two began walking eastbound.

The officer went back to their patrol vehicle for a few moments, and before driving away, the officer looked toward Walmart and noticed Garcia walking towards the front door. The officer drove to the front of Walmart just in time to see Garcia entering the store through the grocery side door. The officer got out and tried to catch up to her just as Garcia was seen grabbing an apple a walking quickly down the main isle.

The officer continued to follow Garcia as she walked really fast down the isle turning toward the liquor department. The officer could see around the corner of the isle where Garcia was looking at the alcohol. Just as the officer moved into the main isle, Garcia was seen entering the back room of the store walking down the hallway toward the emergency exit. She exited through the emergency door, setting off the alarm. The officer ran and caught up with Garcia, and she was placed under arrest for shoplifting and trespassing. Garcia was in possession of a bottle of Vodka and an apple.

Garcia was booked into the Graham County Jail.