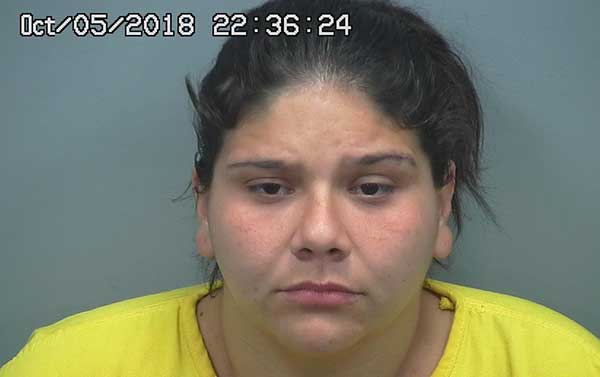 SAFFORD – Authorities responded to the area of 9th Avenue and 13th Street last Friday afternoon due to a report of of a large group of people fighting in the street and a female banging on the door of a residence.

When the first officer arrived and asked who was fighting, two women and a man exiting the yard toward the street – who seemed to be winded – stated no one was fighting, but seemed to be very animated with their movements. The officer asked if anyone inside was hurt or involved, and the woman who rented the home said, “no.” The officer asked to check to make sure, and the woman walked him to the front door. The officer could immediately smell a strong odor of burned marijuana coming from inside the house. The officer asked if anyone in the house had a medical marijuana card, which she stated they did not. The woman was asked to have everyone inside the home exit to the outside.

The woman immediately turned and hurried toward the bathroom, telling others the police were there and could smell the marijuana. The officer entered the residence to prevent any destruction of evidence and to make sure the house was cleared of all occupants. In one of the back bedrooms a couple was found with two small children, and were asked to leave everything as it was. According to the police report, the man became hostile and aggressive at one point with the officer.

Another man that had exited the residence walked to the street claiming to be sick and another officer on scene asked him if he could possibly be overdosing. An ambulance was requested to the area. The officer told the man he could help if he was overdosing, but the man denied it and just asked for an ambulance. Lifeline arrived and began treating the man, eventually transporting him to the Mt. Graham Regional Medical Center Emergency Room. Another woman at the residence later complained of feeling ill and requested to go to the hospital. She was also transported by Lifeline.

Once the occupants were outside, other responding officers were apprised of the situation. One of the men appeared suspicious to officers outside when he was seen going behind a vehicle where police later recovered a small plastic bag containing methamphetamine.  After a warrant was granted, authorities searched the residence inside. Multiple items of paraphernalia were located throughout the house, including, a glass bong on the kitchen table with burned marijuana in the stem, a glass pipe in one of the bedrooms with foil, cut straws and a digital scale. Multiple small packages of heroin were found in the bathroom. In a ventilation area, officers removed a plastic bag containing several .22 caliber bullets. Inside the vent in another bedroom, a large-sized bundle of heroin wrapped in plastic was found, weighing about 17.5 grams.

The search was completed and all of the occupants of the house were transported to the police department and interviewed separately. A man and woman were cited for possession of drug paraphernalia, and a woman identified as Christina McCommis was placed under arrest for possession of narcotics for sale and possession of drug paraphernalia. McCommis reportedly told authorities that she had paid $1500 for the drugs and intended to sell the heroin to make money for her and her boyfriend to take care of their child.