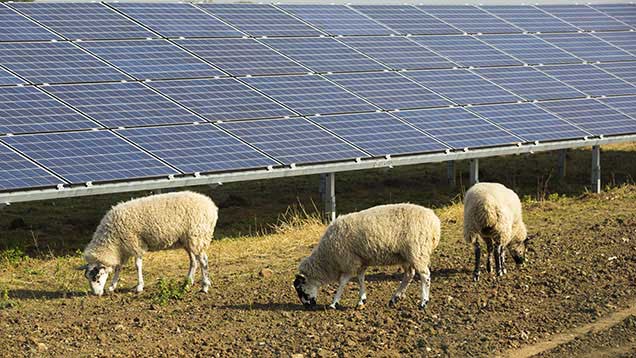 A Houston, Texas, power company that maintains a solar farm west of Willcox, has been using about 200 head of sheep to keep the weeds and grass down around those solar panels. The sheep actually eat and graze under the solar panels keeping the area free of unwanted weeds at a location west of Willcox called Red Horse II.

The sheep come in slowly in the morning, stepping among rows of solar panels that are harvesting the sun’s energy to power 20,000 Arizona homes.

The solar farm tried using people to mow the grass but humans and their machines proved to be problematic. The landscaping equipment was clunky and difficult to maneuver between the rows of solar panels, and it kicked up rocks and debris that could damage the solar arrays. Before the sheep, it would take someone 250-hours to mow the weeds in between the solar panels but now no damage is done to the panels by the sheep and they get fed and watered too.

Red Horse II is owned and operated by a Houston company and contracts with Tucson Electric Power to provide renewable energy.