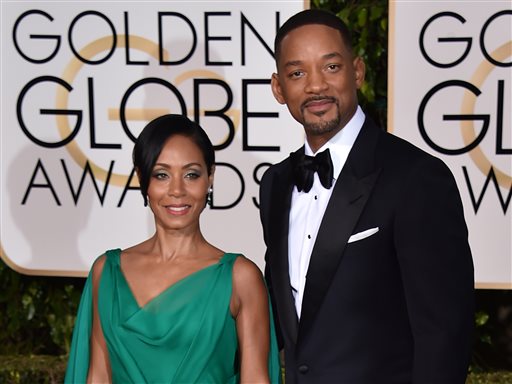 FILE - In this Jan. 10, 2016 file photo, Jada Pinkett Smith, left, and Will Smith arrive at the 73rd annual Golden Globe Awards at the Beverly Hilton Hotel in Beverly Hills, Calif. Smith and Pinkett-Smith are adding their star power to President Barack Obama's initiative to boost opportunities for vulnerable young Americans. The Will & Jada Smith Family Foundation said Friday, April 29, 2016, it will launch a Careers in Entertainment Tour to support Obama's My Brother's Keeper Initiative on its two-year anniversary. (Photo by Jordan Strauss/Invision/AP, File)

The Will & Jada Smith Family Foundation said Friday it will launch a “Careers in Entertainment Tour” to support Obama’s My Brother’s Keeper Initiative on its two-year anniversary.

In keeping with the initiative’s goals, the tour will be aimed at helping underserved high school and college students interested in entertainment industry careers, the foundation said.

“The Careers in Entertainment Tour is an engine for change in our industry, and a means of closing the gap between dreams and the tools necessary to achieve them,” Pinkett Smith said in a statement.

The president’s initiative was launched in 2014 with the goal of helping boys and young men of color and other young people overcome barriers to fulfilling their potential. It has enlisted businesses, nonprofit organizations and local government in the effort.

The task force “applauds the Will & Jada Smith Family Foundation for responding to President Obama’s call to action to ensure all youth have clear pathways to opportunity and success,” said Broderick Johnson, who chairs My Brother’s Keeper, in a statement.

The announcement comes two months after the Oscars faced criticism for an all-white slate of acting nominees, which some observers said reflected both the movie academy’s and industry’s closed ranks.

The tours, set to begin this fall, will be done in partnership with the U.S. Small Business Administration and other organizations, the foundation said.

Students will hear from film and TV industry professionals about a wide variety of jobs involved in the creation, distribution and marketing entertainment projects.

The foundation said it and affiliates will help students identify skills and knowledge needed for jobs and entrepreneurial opportunities.