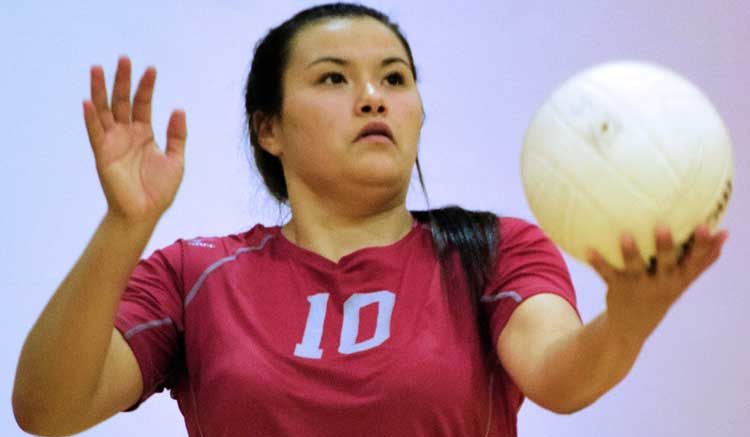 Photo By Raymundo Frasquillo: Duncan sophomore Kaktys Garcia (10) checks where to serve the ball against the opponent’s defense during a recent home match. Garcia went 3-0 as the Wildkats ended 17-0 in serves during the second set of the North Phoenix Prep match. 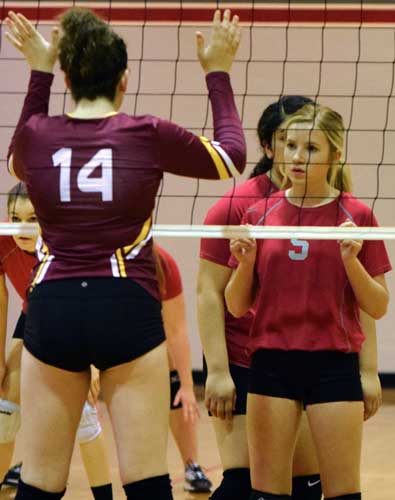 Photo By Raymundo Frasquillo: Duncan 6-foot freshman Melissa Claridge (5) received her varsity baptism under fire against a taller North Phoenix Prep player last week. She recorded a kill tip, narrowing the deficit to 18-24 during the second set of a 3-set loss.

The 26th ranked Wildkats (2-6 overall, 2-6 seeding, minus 6.9062 rating) close out September at the Chandler Prep Invitational Friday the 29th, taking on the Rough Rock Cougars at 4 p.m., the Gilbert Christian Knights at 6 p.m., and the Lakeside Blue Ridge Yellow Jackets at 8 p.m.

A margin of two points was the difference in the fifth set at San Carlos, a 14-16 loss.

The next afternoon against North Phoenix Prep, the serve percentage was 100 (9-9) for Duncan, 94 (17-18) for the opponents following the first full rotation of the second set, however, a 7-point (10-17) score favored the visitors. 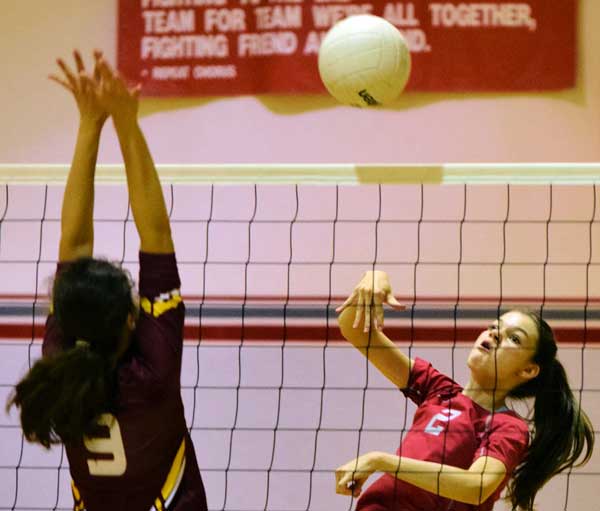 Photo By Raymundo Frasquillo: Duncan sophomore middle hitter/blocker Kaitlyn Lunt (2) slams the ball past the outstretched hands of a North Phoenix Prep defender. Lunt landed two kills during the second set against the visitors who left with a 3-set win Sept. 21.

Unforced errors yielded seven points for the Wildkats and 13 for the Gladiators. Duncan’s scoring was on three kills, two by sophomore Kaitlyn Lunt and one by junior Katelin Stergion along with seven opponent errors, four in hitting, two in passing, and one in serving.

The Gladiators’ scoring was on three kills by different players, an ace serve plus 13 Duncan errors, six serve receiving, five passing, one hitting, and one blocking.

Neither team made a serving error to close out the set; Duncan went 8-0 with four servers and the visitors 9-0 with three. The Wildkats added eight points on a kill tip plus on seven opponent errors while the Gladiators had eight points on two kills, an ace serve plus five Duncan errors.

The third set ended with Duncan having a serve percentage of 94 (16-17) and the visitors 83 (20-24). The Wildkats score 16 points on three kills, two ace serves plus 11 opponents errors, four in serving, three each in passing and hitting, and one in serve receiving. The visitors scored 25 points on eight kills plus 17 opponent’s errors, nine in passing, five in serve receiving, and three in hitting.

Sixth-year head coach Sandi French is being assisted by her daughter Madison.

Wildkats host Panthers; fall in three to Blue Devils, Cowgirls in week one