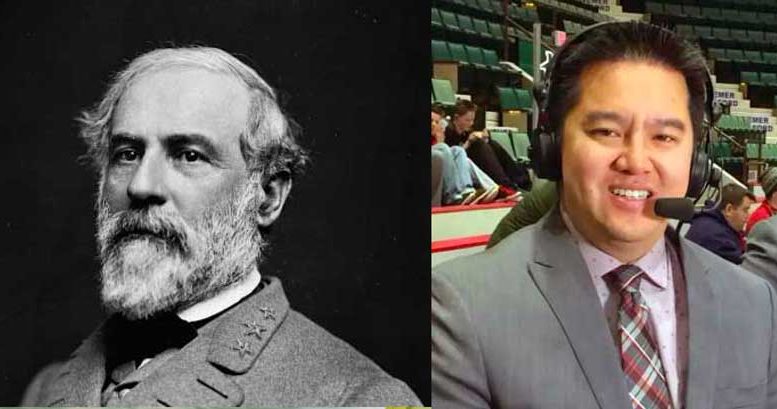 I realize it’s difficult to tell the difference between the two individuals pictured above. In fact, if I didn’t know better, I’d swear they are identical twins.
Except one was a Civil War general who died almost 150 years ago, and the other is a 40-year-old contemporary ESPN sports commentator. The resemblance and career similarities are uncanny.

Even more unbelievable, they both have the same name. What are the odds?

But you can’t fool me – I’m an observant guy. I immediately noticed the distinctions between the bearded old man in the uniform and the Asian-American dude with the spiked hair.

When ESPN proclaimed it was removing Robert Lee from an upcoming University of Virginia football game because the company felt his presence would cause an uncomfortable distraction to the fans and television audience, I immediately thought how could a deceased Civil War soldier – from Virginia – be upsetting to a 2017 Virginia football contest?

I don’t think Gen. Lee played football or even heard of it. Maybe because it hadn’t been invented yet. The “North-South Game” was a little different in 1863 than it is today.

To my amazement, I discovered there was another Robert Lee and he didn’t have anything to do with the Civil War. Actually, I’ve learned there are about 11,000 Robert Lee’s currently residing in the United States, but apparently, only one is a sports announcer for ESPN.

Interestingly, the Gila Valley had its own Robert Lee several years ago – a local pharmacist. Not sure if he was from Virginia, but I’m pretty certain he didn’t fight at Gettysburg.

All of which made me wonder that if the current Robert Lee working for ESPN is not a reincarnation or descendant of the Civil War era Robert Lee, then why did ESPN make such a big deal of removing him from the announcing job?

In case the bosses at the sports channel missed it, here’s a brief bio of the two Robert Lee’s involved in ESPN’s self-inflicted brouhaha.

Gen. Robert E. Lee was a southern general in charge of the Confederate Army of Northern Virginia from 1862 to 1865 when the Confederacy surrendered. President Lincoln previously requested Lee to side with the Union due to Lee’s exceptional military skills and experience. Lee declined because he didn’t wish to take up arms against his friends and family in Virginia. To my knowledge, Gen. Lee was not conversant in Chinese.

Sports commentator Robert Lee, 40, works full-time for a payroll company in New York and is a part-time announcer for ESPN Sports. He graduated from Syracuse University in 1999 with a degree in broadcast journalism.  He has also covered local collegiate basketball games in Albany, NY. Being of Chinese descent, he speaks the language fluently.

Following the recent civil disturbances in Charlottesville, Virginia, ESPN issued the following statement: “We collectively made the decision with Robert to switch games as the tragic events in Charlottesville were unfolding, simply because of the coincidences of his name. In that moment, it felt right to all parties. It’s a shame that this is even a topic of conversation and we regret that who calls play-by-play for a football game has become an issue.”

This whole discombobulated incident raises additional concerns; does ESPN really believe football fans cannot tell the difference between an Asian-American sportscaster named Robert Lee – with no ties to the Confederacy – and a deceased Civil War general? Or that a sports announcer could unwittingly stir up century-old hostilities by describing the on-field activities of a 60-minute football game? Perhaps ESPN management figures irate fans might suddenly storm the broadcast booth, grab the living Robert Lee and lynch him from the nearest light pole?

Just because both men share the same name, one was pulled from an announcing gig while the remains of the other are resting six feet deep in the ground?