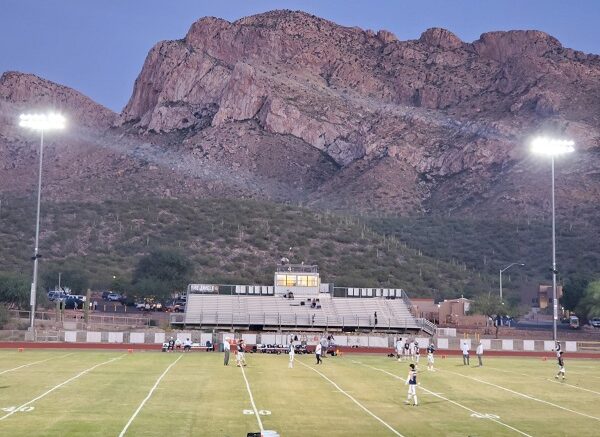 Thatcher and Pusch Ridge warm up in the shadow of the Catalina Mountains on Friday. Lee Patterson/GilaValleyCentral

It was a busy weekend for local high school athletes. Volleyball and football state playoff tournaments started and were full of local teams.

#5 Fort Thomas beat #12 Desert Christian in 3 sets before falling to #4 Mogollon 3-0 in the quarterfinals.

#5 Pima defeated #12 Kingman Academy 3-1 in the opening round before losing a marathon to #4 Trivium Prep 3-2 in the quarterfinals.

#3 Thatcher swept #14 Odyssey Institute 3-0 in the opening round before running into a streaking #6 seed Empire. The Ravens beat Thatcher in five sets to stay undefeated on the season.

#8 Willcox beat #9 Holbrook 42-32. The Cowboys lead 20-8 at halftime before holding of the Roadrunners second half surge. They will travel to #1 Parker on Friday. The Broncs beat Red Mesa 69-14 in the first round.

#4 Morenci won via forfeit over #13 Alchesay who had to cancel due to Covid protocols. The Wildcats will host #5 Gilbert Christian who beat Scottsdale Christian 42-27 in the opener.

#7 Pima took a bit to get rolling but once they did Scottsdale Prep had no answer as the Roughriders rolled to a 57-14 opening round win. They will be on the road at #2 Arizona Lutheran. The Coyotes beat Trivium Prep 61-20 in the first round.

#10 Thatcher beat #7 Pusch Ridge 35-27 to avenge the regular season loss. The Eagles will be on the road Friday at the defending 3A State Champions, Snowflake. The Lobos beat #15 Monument Valley 65-7 in the first round.

Each second round football matchup will be the first meeting between each school this season.