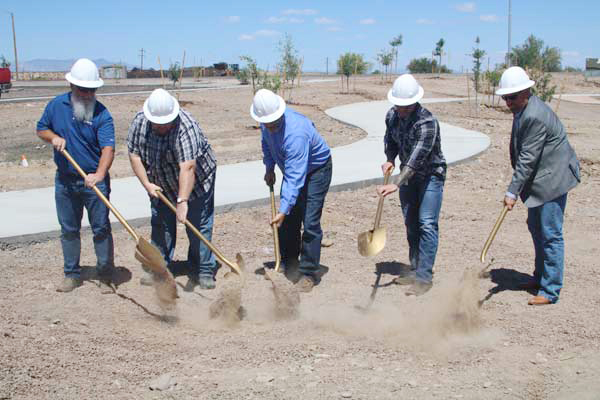 THATCHER — Officials from the Town of Thatcher, Graham County and the Chamber of Commerce joined together for a ceremonial groundbreaking, signifying the start of Valley Telecom’s expansion into Thatcher.

The expansion has been years in the making, first with gathering data about the needs of residents and businesses in the community.

During the groundbreaking ceremony, Graham County Supervisor John Howard, whose district includes Thatcher, said the expansion of internet service will be an economic boon.

“It’s a tremendous asset,” Howard said. “If you start bringing it to smaller communities like this, it’s going to incentivize more people to come to Thatcher to create businesses with the technology we offer.”

Work will begin immediately and be completed in phases, with work first starting on the western side of Thatcher, along U.S. Highway 70, followed by the north-central portion of town. The final phase will cover Daley Estates and all areas should be completed by mid-March 2022.

Work has been contracted to the Mears Group, which continues to hire local crew members via Arizona @ Work.