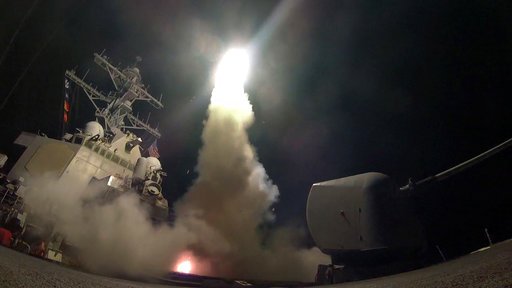 In this image provided by the U.S. Navy, the guided-missile destroyer USS Porter (DDG 78) launches a tomahawk land attack missile in the Mediterranean Sea, Friday, April 7, 2017. The United States blasted a Syrian air base with a barrage of cruise missiles in fiery retaliation for this week's gruesome chemical weapons attack against civilians. (Mass Communication Specialist 3rd Class Ford Williams/U.S. Navy via AP)

PALM BEACH, Fla. (AP) — The United States blasted a Syrian air base with a barrage of cruise missiles Thursday night in fiery retaliation for this week’s gruesome chemical weapons attack against civilians. President Donald Trump cast the U.S. assault as vital to deter future use of poison gas and called on other nations to join in seeking “to end the slaughter and bloodshed in Syria.”

It was the first direct American assault on the Syrian government and Trump’s most dramatic military order since becoming president just over two months ago. The strikes also risk thrusting the U.S. deeper into an intractable conflict that his predecessor spent years trying to avoid.

Announcing the assault from his Florida resort, Trump said there was no doubt Syrian President Bashar Assad was responsible for the chemical attack, which he said employed banned gases and killed dozens.

“Assad choked out the lives of helpless men, women and children,” Trump declared. 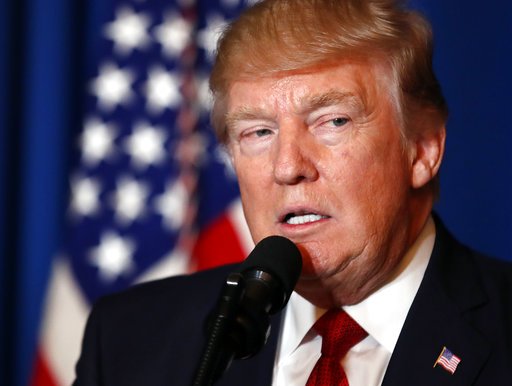 The U.S. strikes —59 missiles launched from the USS Ross and USS Porter — hit the government-controlled Shayrat air base in central Syria, where U.S. officials say the Syrian military planes that dropped the chemicals had taken off. The U.S. missiles hit at 8:45 p.m. in Washington, 3:45 Friday morning in Syria. The missiles targeted the base’s airstrips, hangars, control tower and ammunition areas, officials said.

The attack killed some Syrians and wounded others, Talal Barazi, the governor of Syria’s Homs province, told The Associated Press. He didn’t give precise numbers.

Trump ordered the strikes without approval from Congress or the backing of the United Nations. U.S. officials said he had the right to use force to defend national interests and to protect civilians from atrocities.

Syrian state TV reported a U.S. missile attack on a number of military targets and called the attack an “aggression.”

The U.S. assault marked a striking reversal for Trump, who warned as a candidate against the U.S. being pulled into the Syrian civil war that began six years ago. But the president appeared moved by the photos of children killed in the chemical attack, calling it a “disgrace to humanity” that crossed “a lot of lines.”

U.S. officials placed some of the blame on Russia, one of Syria’s most important benefactors. Secretary of State Rex Tillerson, in Florida with Trump, said Moscow had failed in living up to a 2013 agreement that was intended to strip Syria of its chemical weapons stockpiles.

The U.S. Tomahawk missiles, fired from warships in the Mediterranean Sea, targeted an air base in retaliation for the attack that America believes Syrian government aircraft launched with the nerve agent sarin mixed with chlorine gas. The president did not announce the attacks in advance, though he and other national security officials ratcheted up their warnings to the Syrian government throughout the day Thursday.

The strike came as Trump was hosting Chinese President Xi Jinping in meetings focused in part on another pressing U.S. security dilemma: North Korea’s nuclear program. Trump’s actions in Syria could signal to China that the new president isn’t afraid of unilateral military steps, even if key nations like China are standing in the way.

“This clearly indicates the president is willing to take decisive action when called for,” Tillerson said. 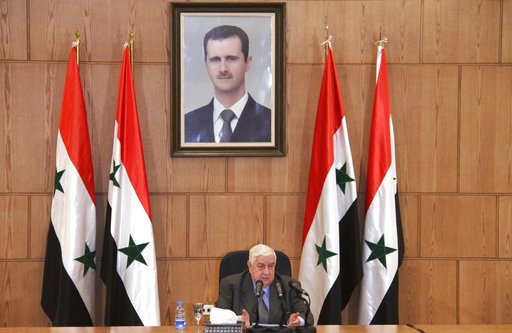 In this photo released by the Syrian official news agency SANA, Syrian Foreign Minister Walid Moallem, speaks during a press conference, Thursday, April 6, 2017, in Damascus, Syria. Moallem told reporters Thursday that it didn’t use chemical weapons in Tuesday’s deadly chemical weapons attack in Syria’s northern Idlib province, and he blamed the rebels for stockpiling the deadly substance. Moallem said any investigative mission would need to take off from Damascus and be far from the sphere of Turkish influence. (SANA via AP)

Trump has advocated greater counterterrorism cooperation with Russia, Assad’s most powerful military backer. Just last week, the Trump administration signaled the U.S. was no longer interested in trying to push Assad from power over his direction of a conflict that has killed hundreds of thousands of people and led to the worst refugee crisis since World War II.

U.S. officials portrayed the strikes as an appropriate, measured response and said they did not signal a broader shift in the Trump administration’s approach to the Syrian conflict.

“The intent was to deter the regime from doing this again,” said Navy Capt. Jeff Davis, the Pentagon spokesman. “It will be the regime’s choice if there’s any more, and it will be based upon their conduct going forward.”

Still, the assault risks plunging America into the middle of Syria’s conflict, complicating the safety of the hundreds of U.S. forces fighting a separate campaign against the Islamic State group in the north of the country. If Assad’s military persists in further gas attacks, the Trump administration might logically pursue increased retaliation.

Russia and Iran, Assad’s allies, pose other problems. Russian military personnel and aircraft are embedded with Syria’s, and Iranian troops and paramilitary forces are also on the ground helping Assad fight the array of opposition groups hoping to topple him.

Before the strikes, U.S. military officials said they informed their Russian counterparts of the impending attack. The goal was to avoid any accident involving Russian forces.

Nevertheless, Russia’s Deputy U.N. ambassador Vladimir Safronkov warned that any negative consequences from the strikes would be on the “shoulders of those who initiated such a doubtful and tragic enterprise.”

The U.S. also notified its partner countries in the region prior to launching the strikes. 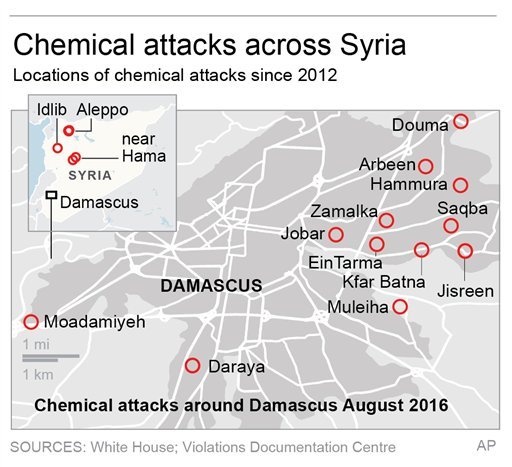 Chemical attacks in Syria since 2012

Trump’s decision to attack Syria came three-and-a-half years after President Barack Obama threatened Assad with military action after an earlier chemical weapons attack killed hundreds outside Damascus. Obama had declared the use of such weapons a “red line.” At the time, several American ships in the Mediterranean were poised to launch missiles, only for Obama to abruptly pull back after key U.S. ally Britain and the U.S. Congress balked at his plan.

He opted instead for the Russian-backed plan that was supposed to remove and eliminate Syria’s chemical weapons stockpiles.

The world learned of the chemical attack earlier in the week in footage that showed people dying in the streets and bodies of children stacked in piles. The international outcry fueled an emotional response from Trump, who appeared to abandon his much-touted “America First” vision for a stance of humanitarian intervention, akin to that of previous American leaders.

Trump seemed to rapidly reconsider his feelings about Assad, saying: “He’s there and I guess he’s running things, so something should happen.”

The show of force in Syria raises legal questions. It’s unclear what authority Trump is relying on to attack another government. When Obama intervened in Libya in 2011, he used a U.N. Security Council mandate and NATO’s overall leadership of the mission to argue that he had legal authority — arguments many Republicans opposed. Trump can’t rely on either justification here.

Unclear also is whether Trump is adopting any broader effort to combat Assad. Under Obama, the United States largely pulled back from its support for so-called “moderate” rebels when Russia’s military intervention in September 2015 led them to suffer a series of battlefield defeats. Instead, Obama sought to work with Russia on a negotiated transition.

Trump and his top aides had acknowledged in recent days the “reality” of Assad being in power, saying his ouster was no longer a priority. But the chemical weapons attack seemed to spur a rethink. In Florida on Thursday, Tillerson said of Assad, “There’s no role for him to govern the Syrian people.”

Copyright 2017 The Associated Press. All rights reserved. This material may not be published, broadcast, rewritten or redistributed