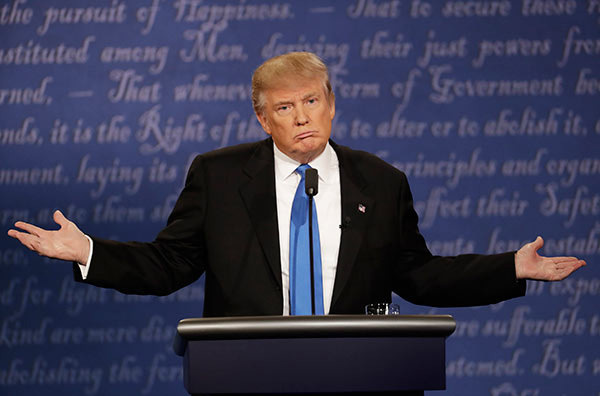 If Donald Trump is so wealthy, why would he lift $12,000 from his charitable foundation to purchase a Tim Tebow helmet and jersey?

If he’s so wealthy, why would he turn to his foundation, not his own stash of cash, to contribute $25,000 to the campaign of Florida Attorney General Pam Biondi?

The latter occurred just as Biondi was considering investigating the affairs of Trump University.

These and so many other questions are raised by Washington Post’s David Farenthold’s extensive, and barely discussed, coverage of the Donald J. Trump Foundation.

I am going to wager right now that Trump has only a foggy idea of what micro credit is, and that his supporters couldn’t care less.

Well, micro credit is the principal good promoted by the Clinton Foundation – tiny loans to people in Third World countries to help them become entrepreneurially self-sufficient. The magic of micro credit has been demonstrated across the globe, and might be one of the best investments any charity could make.

The Trump Foundation, meanwhile, did such things as purchase a 6-foot painting of the Donald and his lovely wife, and donate $100,000 to right-wing Citizens United, eponymous plaintiff of the Supreme Court ruling blowing a host of campaign spending laws out the window.

The tale of two foundations is just one example of the false equivalency being applied to the two candidates.

So, you believe Hillary Clinton can’t be trusted. If that’s your criterion for supporting Trump, please make note that Politifact has studied a raft of Trump claims and found only 15 percent of them “true” or “mostly true.”

Instead, Politifact’s analyses are ablaze with determinations like “pants on fire” for Trump’s claim that Ted Cruz’s father was photographed with Lee Harvey Oswald, or Trump’s statement now that he opposed the Iraq invasion before it happened.

And, of course, there is Trump’s eight years of insisting that Barack Obama wasn’t born in the United States. We can all be relieved now to hear him say that’s a bunch of hokum. When will he walk back all of the other fairy tales he has spun into Republican nominee gold?

No wonder, as he approached the debates, Trump was saying that fact-checking isn’t the job of moderators. Maybe that’s true, but someone ought to hold the man accountable for the lies he sells.

Try and convince us that Clinton can’t be trusted. But no presidential candidate ever has merited the kind of critique presented in a Washington Post commentary in which the respective ethics advisers to presidents George W. Bush and Barack Obama, Richard Painter and Norman Eisen, ran down a long list of how a Trump presidency would be “ethically compromised.”

Clinton’s foes have assailed her for being less than open to the press. That’s not an unfair accusation. However, how does Trump get a pass when he refuses to share his tax returns with the voters and has gone as far as to bar entire news organizations from covering his campaign?

Was Clinton compromised when her foundation solicited donations overseas? Painter and Eisen see potential problems with that. However, they see far greater conflicts ahead in a Trump presidency in his refusal to commit to establishing a blind trust to deal with his overseas business holdings.

In those situations, write Painter and Eisen, “Would Trump act to benefit the national interest, or his and his family’s investments?”

“What a joke,” Trump is thinking. “Ethics?” This is a business. When we take over, we run it our way.