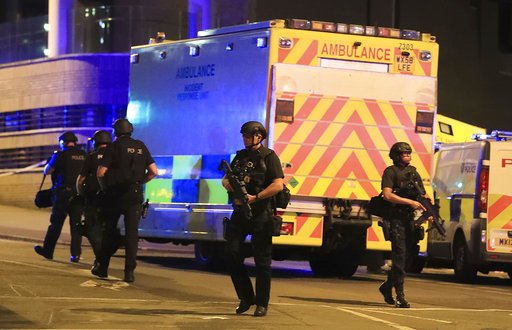 LONDON (AP) — An explosion struck an Ariana Grande concert in northern England late Monday, killing at least 19 people and injuring dozens in what police say they are treating as a terrorist attack.

Greater Manchester Police said 19 people were confirmed dead and roughly 50 were injured by the explosion at Manchester Arena. Emergency vehicles were helping the injured and bomb disposal units were later seen outside the venue. 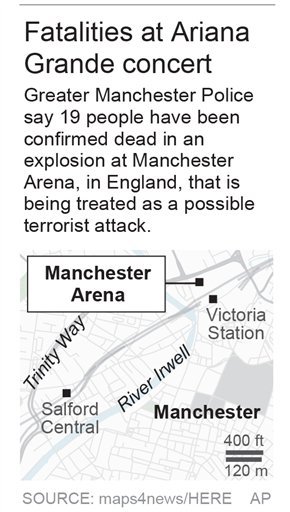 There was mass panic after the explosion at the end of the concert, which was part of Grande’s The Dangerous Woman Tour. The singer was not injured, according to a representative.

Britain’s terrorist threat level has been set at “severe” in recent years indicating an attack is highly likely. Police said the explosion is being judged a terrorist attack unless new information proves otherwise.

Witnesses reported hearing two loud bangs coming from near the arena’s bars at about 10:35 p.m. but there were few further details.

“A huge bomb-like bang went off that hugely panicked everyone and we were all trying to flee the arena,” concertgoer Majid Khan, 22, told Britain’s Press Association. “It was one bang and essentially everyone from the other side of the arena where the bang was heard from suddenly came running towards us as they were trying to exit.”

Added Oliver Jones, 17: “The bang echoed around the foyer of the arena and people started to run.”

Video from inside the arena showed concertgoers screaming as they made their way out amid a sea of pink balloons.

Police advised the public to avoid the area around the Manchester Arena, and the train station near the arena, Victoria Station, was evacuated and all trains canceled.

Joseph Carozza, a representative from Grande’s U.S. record label, said the singer is OK and they are investigating what happened. 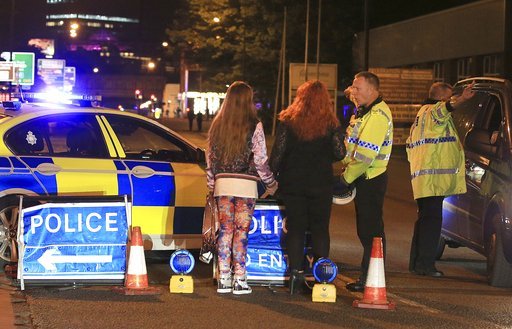 Police work at Manchester Arena after reports of an explosion at the venue during an Ariana Grande gig in Manchester, England Monday, May 22, 2017. Several people have died following reports of an explosion Monday night at an Ariana Grande concert in northern England, police said. A representative said the singer was not injured. (Peter Byrne/PA via AP)

The 23-year-old Grande, with her signature high ponytail, went on to also star in spinoffs that included “iCarly,” as she worked to develop her recording career.

The tour began in Phoenix in February. After Manchester, Grande was to perform at venues in Europe, including Belgium, Poland, Germany, Switzerland and France, with concerts in Latin America and Asia to follow.