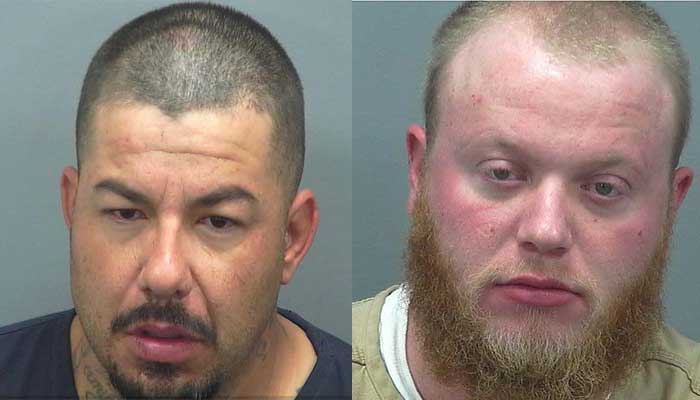 Two men were arrested Sunday night for assault and criminal damage after causing problems at two bars in Safford.

Kyle Virga and Anthony Uribe were at Shane’s Place Sunday Night consuming alcohol at the bar when Virga apparently became upset about the service for an unknown reason. He said that he and his friend, Anthony Uribe was going to leave and go to the Bull Pen.

The owner of the Shane’s place told authorities that he thought nothing of the incident until his security guards and a patron told him that Uribe was outside hitting his truck with a baseball bat. Uribe and Virga then jumped in an older SUV and headed to the Bull Pen.

When authorities arrived the victim of the truck assault showed the officers his truck, which had multiple white scuff marks on the driver’s side window. The window had not been broken but was marred and damaged by the bat.

While an officer was investigating the incident at Shane’s Place, other officers were responding to a report of fighting at the Bull Pen. After leaving Shane’s Place the two men apparently went to the Bull Pen and started causing problems immediately. A bouncer approached them and asked them to leave. According to the police report Uribe and Virga immediately became confrontational with the security guard and began to argue with him. Uribe allegedly punched him in the face with a closed fist. Virga was apparently chasing a bar associate around with a bar stool. The security guard deployed a taser on Uribe, which struck him in the side but did not stop him.

Authorities arrived as the two men were attempting to flee the Bull Pen. The pair jumped into a tan SUV and were trying to peel out of the dirt lot. When a deputy arrived and turned on his emergency lights, Uribe jumped out of the passenger seat and ran. Virga threw a beer bottle out of the driver’s side window and got out of the vehicle and tried to run, but ultimately obey law enforcement commands to get on the ground.

Another deputy chased Uribe on foot but lost him as Uribe ran between buildings of the health department and out of view. More officers arrived and searched for Uribe. He was found hiding in a dumpster, which belonged to the Graham County Court. Uribe was taken into custody without further incident. An officer observed blood splatter all over Uribe’s shirt, forearms and face. Uribe claimed that the splatter came from the empty trash can he was hiding in. The officer looked in the dumpster but couldn’t find any red liquid or trash.

Authorities asked Virga for his side of the story and he said that he hadn’t done anything wrong. Virga – who was in a kneeling position while being questioned – asked if he could stand or sit in his car, but the officer told him that he could either stay kneeling or sit in his patrol car. Virga got up and walked toward the vehicle but refused to get in. Virga refused to cooperate with field sobriety tests and also refused to take a breathalyzer. He was transported to the Safford Police Department where they drew blood for analysis. He was then transported to the Graham County Jail. While processing him, it was discovered that Virga had an outstanding warrant out of Clifton for failure to appear on an original charge of driving on a suspended license.

Uribe was transported to the Graham County Jail separately. He submitted to a portable breath test, which indicated his blood alcohol content was .240.