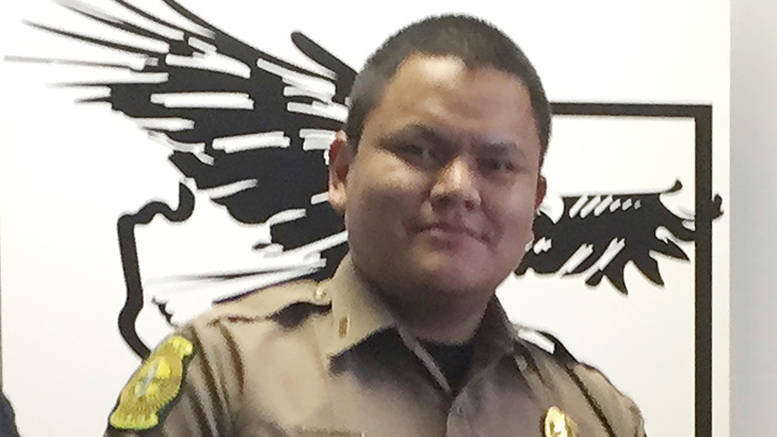 PREWITT, N.M. (AP) — A tribal police officer killed on a sprawling Native American reservation was shot after he encountered two people in a vehicle on a county road in the middle of the night, and a woman who saw he was wounded used his radio to call for help, authorities said Monday.

Navajo Nation Officer Houston James Largo, 27, came across the vehicle early Sunday while responding to a report of domestic violence at a rural address north of the town of Prewitt. He was shot and critically wounded, McKinley County Sheriff’s Deputy Roberta Jaramillo said.

“A female saw that the officer was down and called dispatch over his radio,” Jaramillo said.

Authorities quickly identified one of the people in the vehicle as the suspect, and the search intensified as daylight broke. Footprints helped officers track the suspect, who was taken into custody later Sunday morning.

Authorities did not immediately release any information about the suspect, the circumstances of the arrest or what led to the shooting. They also provided no details on the woman who called for help.

A decorated officer, Largo was flown to University of New Mexico Hospital in Albuquerque and died hours later Sunday, his death spurring a flood of condolences on social media, many from other police agencies around the country.

Largo was the first officer killed this year in New Mexico and one of seven shot in the U.S. while on duty. This follows a year in which the number of law enforcement officers shot and killed increased sharply, according to the National Law Enforcement Officers Memorial Fund.

James Tierney, acting U.S. attorney for New Mexico, said in a statement that Largo was dedicated to his job and touched many through his work on the Navajo Nation and his commission as a special federal officer with the Bureau of Indian Affairs’ Office of Justice Services.

“His loss is a tragic reminder that the work of our law enforcement officers is profoundly heroic and deserving of our most emphatic support,” Tierney said.

“They are the ones who stand guard over our nation and protect us,” Begaye said in a statement.

There are roughly 225 sworn officers in the Navajo Police Department, which covers more than 27,000 square miles in portions of New Mexico, Arizona and Utah. With Largo’s death, the tribe has lost 13 officers in the line of duty since 1975.

In 2015, Navajo Officer Alex Yazzie was shot and killed while pursuing a suspect who had fired at another officer who had responded to a domestic violence call near the Arizona-New Mexico state line. Two other officers were wounded during that shootout.

Navajo Council Delegate Edmund Yazzie, chair of the Law and Order Committee, said the tribe is well aware that domestic violence is a major problem in many communities on the reservation.

“Unfortunately, many of our officers face this devastating issue every day when they are on duty, and sadly it resulted in the loss of one of our bravest today,” he said in a statement.