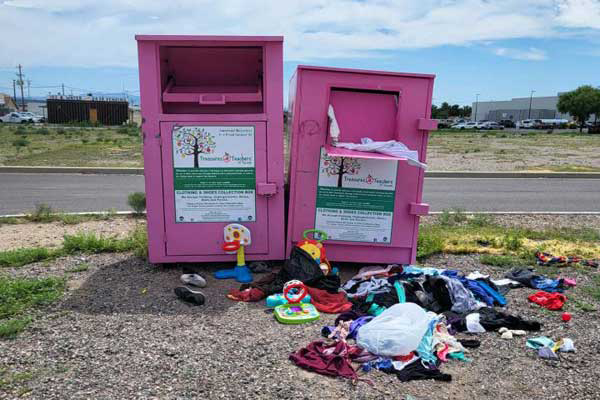 Clothing and other items litter the ground around the pink donation boxes located around the Gila Valley. The boxes support organizations outside of Graham County. - Contributed Photo

SAFFORD — The constant state of mess surround the pink and white clothing donation boxes has a number of Safford citizens questioning why the city can’t take action.

But City Manager John Cassella said the city is limited in its power due to the private nature of the boxes and where they sit.

He told Gila Valley Central the city is limited to requiring business licenses from the box owners. Because the boxes are privately owned and sit on private land with the permission of the landowner, the city has no enforcement jurisdiction.

Cassella added that it’s up to the landowners to ensure the area around the boxes is neat, and that he was reaching out in hopes the landowners require more diligence from the box owners.

City Councilman Mike Andazola suggested residents could help by donating locally rather than putting items in the boxes, which support for-profit businesses in Maricopa and Pima counties.

“There are more options in the community, so people can use their resources to take their items to,” Andazola said. “It’d be nice to drop it off to another organization within the community, and I would check into that.”