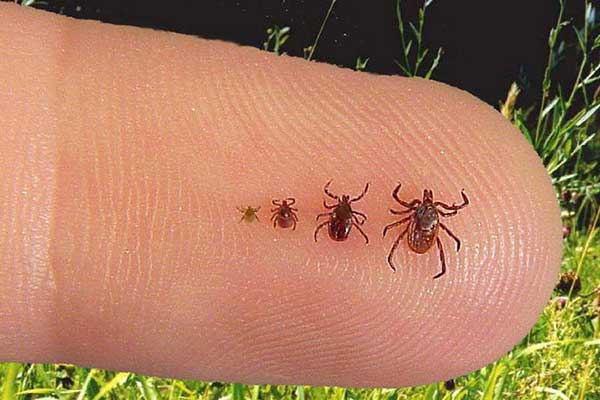 Blacklegged ticks are quite small and could be mistaken for a freckle. From left to right: The blacklegged tick larva, nymph, adult female and adult male. When the blacklegged tick is in its nymph stage, the risk of transmission of Lyme disease is the greatest. Nymphs are tiny (less than 2 mm) and are difficult to see.

Summer is here, and nature beckons. The benefits of spending time outside – from an increase in vitamin D levels to the healing powers of nature – are common knowledge, and outdoor activities are widely encouraged by various health organizations. But while you’re out and about enjoying fresh air, don’t forget to take precautions against the possibility of being bitten by a tick.

Ticks are tiny arthropods that live by feeding on the blood of other animals and people. They often transmit a variety of complicated infections that, if untreated, can lead to dire consequences. But you don’t have to let these tiny creatures get in the way of your enjoyment of nature. Just make sure to follow few simple rules before and after your outing:

• Treat clothing and gear with products containing permethrin, and your body with EPA-registered insect repellent.

• Cover up if you will be spending time in bushy or wooded areas or wandering through fields of tall grass. Wear long sleeves and tuck your long pants into your socks — while this look would be frowned upon by the fashion-conscious, it may, literally, save your life!

• Once home, check your clothes and body for ticks, and don’t forget some of the not-so-obvious places, like your scalp, belly button and underarms.

According to the Centers for Disease Control and Prevention, the number of people diagnosed with Lyme disease in the United States has tripled in the past 15 years. According to the report, more than 640,000 cases were reported across the country from 2004 through 2016, though officials say the actual number of illnesses is likely much higher.

The most common tick-borne diseases in the United States were Lyme disease and ehrlichiosis/anaplasmosis. West Nile, dengue, and Zika accounted for the most mosquito-borne infections.