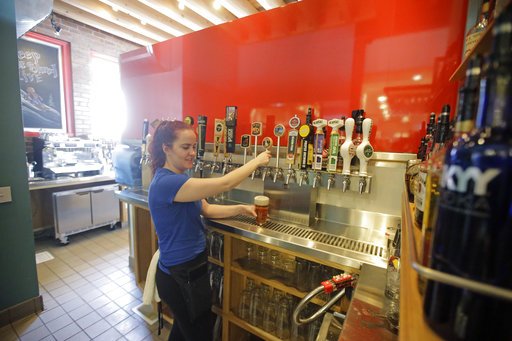 FILE - This March 1, 2017, file photo, Porcupine Pub & Grille server Sarah Fisher pours a beer behind the "Zion Curtain," in Salt Lake City. Utah restaurants will have more freedom to mix and pour alcohol in front of customers under a measure awaiting Gov. Gary Herbert's signature. But other concessions in the proposal aimed at keeping kids away from bars could complicate restaurant seating and leave some establishments keeping up their frosted glass walls known as "Zion Curtains," used to hide the preparation of drinks. (AP Photo/Rick Bowmer, File)

But other concessions in the proposal aimed at keeping kids away from bars could complicate restaurant seating and leave some establishments keeping up their frosted glass walls known as “Zion Curtains,” used to hide the preparation of drinks.

The nickname is a reference to influence of the Utah-based Mormon church, which instructs its members to avoid drinking alcohol.

Things to know about the legislation, which Herbert has said he supports and is expected to sign before a March 29 deadline:

What is a ‘Zion Curtain?’

Rules hiding restaurant bartenders from customers have been around for decades in Utah. Proponents of the restrictions say they keep restaurants from looking like bars and hide the “glamour” of bartending from children. In 2009, Utah passed a major overhaul of liquor laws that got rid of the system treating bars like private, members-only clubs. That law allowed restaurants to get rid of their Zion Curtains and start handing drinks over the bar to customers, but as a compromise, any restaurant constructed after that point had to prepare drinks out of sight, generally by building the glass walls or using a back room.

Utah’s hospitality industry, people who drink alcohol and even non-drinking legislators say the barriers are strange and serve no purpose. The governor said this year that there’s no evidence that children are any more likely to drink alcohol if they see alcoholic drinks being prepared in restaurants, and critics have pointed out that customers can still enjoy alcoholic drinks in full view of customers. They also say Zion Curtains make for an inefficient setup and can even be a safety concern, because some customers want to see what’s going into their drink. Restaurants have pointed out the rule is unfairly applied and can burden older restaurants. Lamb’s Grill in Salt Lake City, which has been in operation for nearly a century, was required to start using a Zion Curtain last year after the restaurant changed ownership and temporarily lost its liquor license.

What changes under the new law?

Under the new law, restaurants would not have to use a Zion Curtain if they instead keep diners under 21 away from bars. Restaurants would instead need to ensure that children are seated at least 10 feet away from a bar, or 5 feet away if the smaller zone is fenced off by a some kind of half wall or railing at least 3.5 feet tall. Adults who appear to be age 35 or younger would have their IDs electronically scanned if they wanted to be seated in one of the child-free “buffer-zones” around the bar. Restaurants could only make an exception and seat kids closer to the bar if there are no other open tables and the minor is with someone who is at least 21.

Does this mean the Zion Curtains are going away?

No. Some restaurants are expected to take down their barriers and start serving drinks to customers over their bar. But lawmakers and restaurants say some eateries may choose to keep their Zion Curtains because it may not make sense to configure a child-free zone around their bars and they could save on renovation costs. The new law would also apply to all restaurants, so that means older establishments will have to comply — meaning some could end up rebuilding their Zion Curtains a decade after they were allowed to take them down.

What else does the law do?

The law also creates new alcohol abuse prevention programs and raises the price of beer containing more than 4 percent alcohol by volume, wine and liquor. Utah currently marks up the price on liquor and wine 88 percent from the case price and 66.5 percent for beer. Those would be raised 2 percentage points. The law also simplifies licensing for restaurants and bars, sets limits on how close bars and restaurants can be to places like churches and parks and ensures malt beverages like alcoholic root beer are clearly labeled and can’t be mistaken for soda pop.