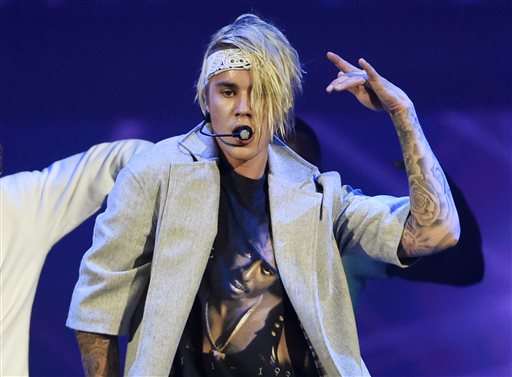 FILE - In this March 20, 2016 file photo, Justin Bieber performs during his "Purpose World Tour" in Los Angeles. Bieber received 11 Billboard Music Award nominations, Monday, April 11, including top artist and top male artist. The show will air live on ABC from the T-Mobile Arena in Las Vegas on May 22. (Photo by Chris Pizzello/Invision/AP, File)

The R&B artist is leading the nominees at this year’s Billboard Music Awards with 16 nods in categories such as top artist, top hot 100 song and top Billboard 200 album.

Justin Bieber is following behind the “Can’t Feel My Face” singer with 11 nominations, including top artist and top male artist.

Fetty Wap and Drake are each up for 10 awards. Drake will compete against himself in the top rap album category with “If You’re Reading This It’s Too Late” and his collaboration with Future on “What A Time To Be Alive.”

The Weeknd, Bieber and Drake will compete against Adele and Swift for the top artist award.

The show will air live on ABC from the T-Mobile Arena in Las Vegas on May 22.