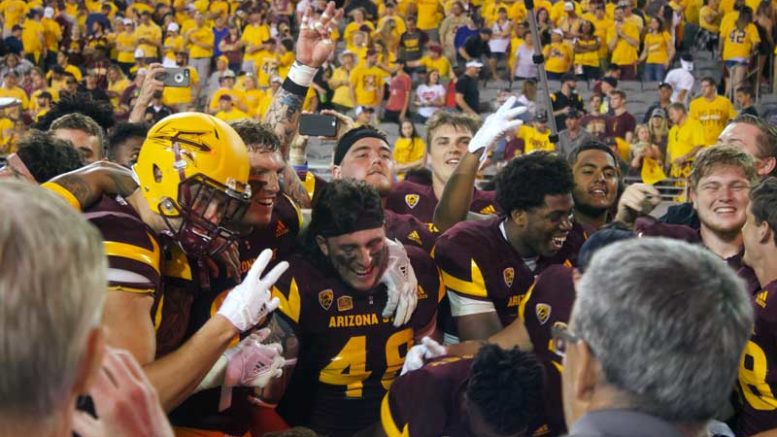 Jon Johnson Photo/Gila Valley Central: Frank Ogas Jr. (48) celebrates with teammates after beating the University of Arizona in the Territorial Cup. Ogas will suit up for his last collegiate football game this Friday in the Hyundai Sun Bowl.

TEMPE – The end is near. The dream of being on a collegiate football team is about to end for Morenci Class of 2013 grad Frank Ogas Jr. It concludes in a few days this week, like the words of a Marty Robbins song, ‘out in the west Texas town of El Paso.’

Photo By Raymundo Frasquillo: Redshirt senior Frank Ogas Jr. heads toward student section to acknowledge their support prior to kick-off.

Ogas has been an Arizona State University Sun Devil football player since leaving Morenci. The team is pitted against the No. 24 North Carolina State Wolfpack in the Hyundai Sun Bowl on Friday, Dec. 29. The dream ends with the final horn of the Hyundai Sun Bowl. A televised broadcast will be by CBS, with kickoff at 1 p.m.

Ogas left Christmas Day with the team via charter plane, following a few days with his parents and siblings after the end of the Fall semester, for El Paso.

His final game as a Sun Devil is nearing. What began at the Pop Warner level in Morenci, from kindergarten through sixth grade, with one of his first teachers, his father, and continued in high school, also under his father. Now, the fact that it will be his last game is starting to be realized.

Along the way, he overcame injuries, to an arm as a freshman and a leg as a sophomore, to earn All-Arizona honors as a senior, playing against a Southern California all-star team after graduation. 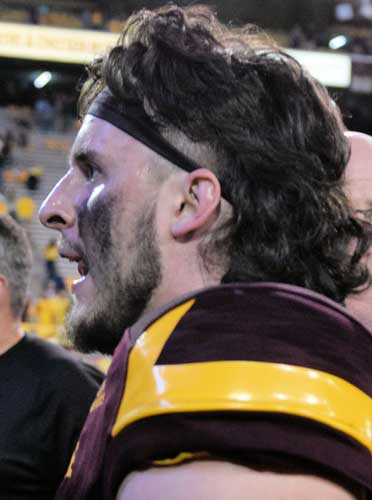 He always believed he would make the football team in college, even while sidelined with his season-ending leg injury. His family physician in Silver City advised him what to do; he followed it and was productive as a junior and senior, going out of his way to personally thank the Morenci supporters on hand for the 2012 2A state final in Northern Arizona University’s J. Lawrence Walkup Skydome.

“You have a dream, chase it,” Ogas said. “You will be told no by a lot of people. Decide whether to work for it or not. Never give up. Lock in, focus. You can accomplish.”

“It’s been a great career here at ASU and (I’m) thankful for everything this program has done for me. I’ve truly been blessed,” he said. “I have bitter-sweet memories, but I have no regrets. I did everything I could for the team and myself.”

There will be no more summer practice sessions, usually about a month before school starts, or Camp Tontozona for him.

The daily routine of breakfast, hour-and-a-half team meetings including viewing videos/film on opponents, two-and-a-half hours of practice plus 40-45 minutes of lifting, a half-hour lunch and a to-go box for supper, followed by classes, will be behind him. It has been a full-time job. 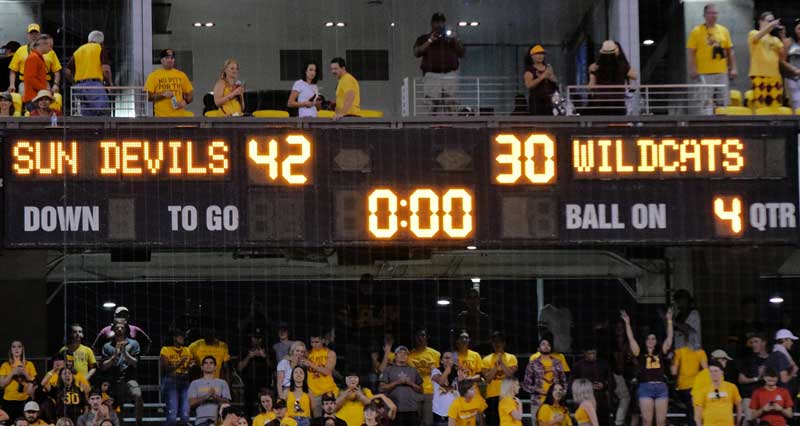 Photo By Raymundo Frasquillo: The final score of the 91st Territorial Cup rivalry contest with the University of Arizona, won by Arizona State.

He has spent a great deal of time in the Carson Student-Athlete Center and his graduate classes are currently online. The cafeteria for the football team is next to the locker room.

The seniors were introduced prior to the final home game; the 91st Territorial Cup rivalry contest versus the University of Arizona on Nov. 25, a 42-30 come-from-behind Sun Devil win to close the regular season with a 7-5 overall record. His image was viewed on the state-of-the-art Display Antenna System (DAS) and Wi-Fi network or North end zone video screen. 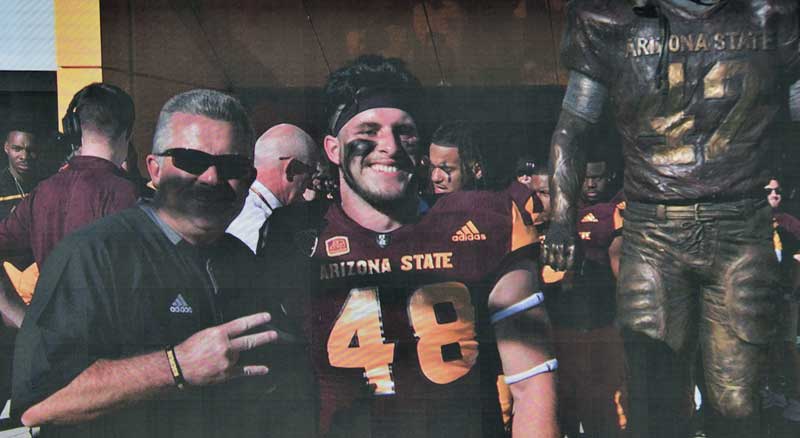 His parents and siblings, the ones who supported him from day one, along with relatives and friends were on hand for the game.

“It was awesome,” Ogas said. “It was the first completely sold out game – all seats filled to the very top – since the expansion.” 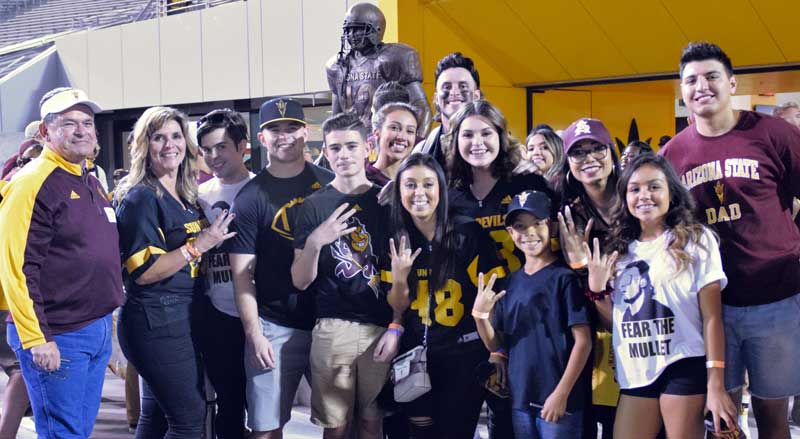 Ogas will be able to count the number of games played in on one hand and his individual statistics will not be close to what he had in high school, averaging 6.9 yards (93-639) per carry with 12 touchdowns and 14.5 yards (8-116) per catch plus a touchdown as a senior. 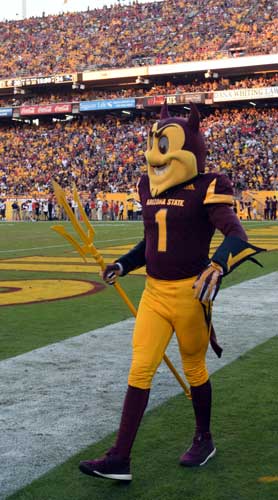 But, that’s okay with him. His focus, as in Morenci, was to do whatever he could for the good of the team. His daily preparation, in the team meetings, practice sessions, and weight lifting sessions, was to be ready in case he was needed.

He entered the Tempe school on a four-year academic scholarship and earned a full-ride athletic scholarship this year. The redshirt senior was on the scout team two years before becoming a backup tight end this season. Aside from knowing the offensive plays, including blocking schemes, and being physically ready, he maintained a 3.0-grade point average or higher in the classroom and was recognized as a ‘scholar baller’ every semester (nine) enrolled in school. Most recently, he was lauded as the male student-athlete with the highest grade point average for October 2017.

His biggest accomplishment has been learning management of both time and money, something he can use after leaving college.

An educational studies bachelor’s degree was earned in May 2016 and he is on track to complete emergency management or homeland security master’s degree requirements in May 2018. 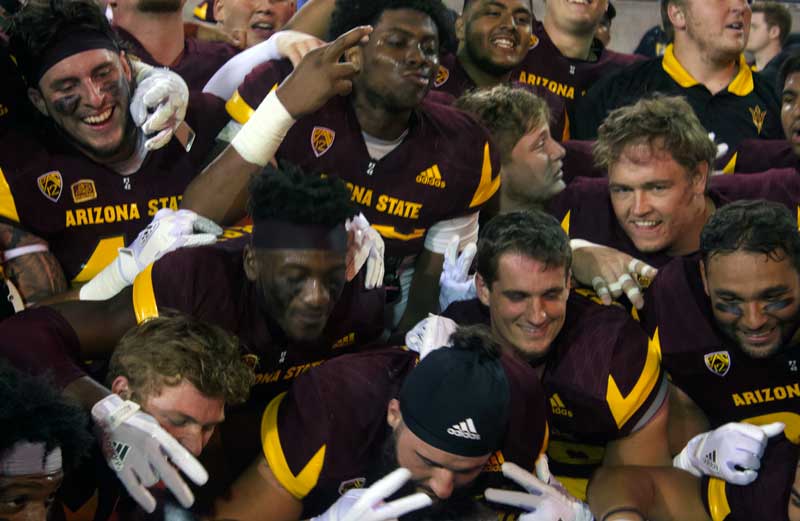 Ogas feels as the renowned children’s book author Dr. Seuss said, ‘Don’t cry because it’s over, smile because it happened.’ “That’s appropriate,” he said. He will be ready to start the next chapter of his life. His undergraduate degree was with the aspiration of one day coaching football at the college level. 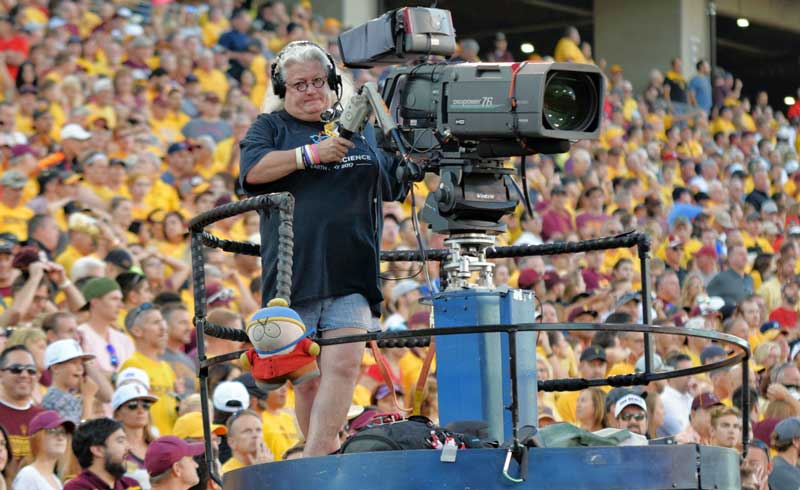 Photo By Raymundo Frasquillo: A television camera operator follows the game action in front of the home crowd.

He will not be completely detached from the football world. When classes resume for the Spring semester, his morning routine will include training for the seniors’ Pro-Day tryouts. “The strength staff will take care of us,” he said.

Whatever he chooses, when finished,  he will have several doors open for him to step through and success has already been a part of his life.