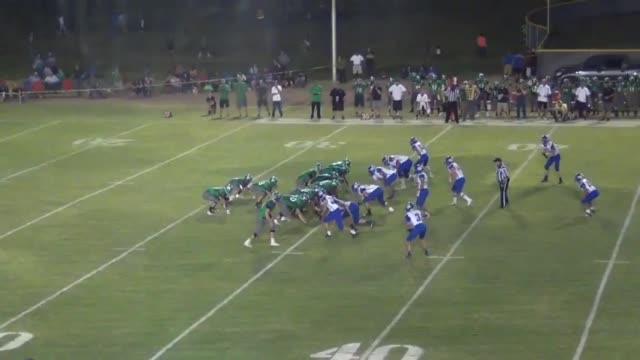 The Thatcher Eagles came into Friday night’s game undefeated against the winless Safford Bulldogs but the records never seem to matter in the Rivalry Game.

Thatcher took the opening kickoff and methodically moved the ball down the field with their patented run game before the Safford defense forced a turnover on downs at the 10 yard line. The Eagles drive lasted nearly 8 minutes but came up empty. That seemed to fire up the Bulldogs because they capped a 90 yard drive with a 1 yard CJ Scrivner TD dive to take the early 7-0 lead. The big play in that drive was a 43 yard pitch and catch from QB Mason Duros to Robert White.

The ‘Dogs kept up the pressure on defense in the 2nd quarter and got another shot on offense. This time it was a 26 yard TD pass to Scrivner from Duros to give the Dogs a commanding 14-0 lead with 3:07 to play in the first half. Thatcher was facing their largest deficit of the season at that point and dug deep and executed a perfected 2 minute no huddle drill to answer before halftime with a 2 yard Bretton Dodge TD run. Safford led 14-7 at the break.

The Bulldogs got the ball to start the 3rd quarter and went 3 and out. Thatcher continued with their momentum and pounded the football right at Safford en route to the 2nd Dodge TD, this time from 15 yards out. 14 unanswered points for the Eagles tied the game with 8:15 to play in the 3rd.

The Bulldogs would answer in this back and forth game nearly 3 minutes later with a 33 yard TD pass from Duros to WR Justin Torrio. Earlier in the drive Torrio made an acrobatic catch on the sideline to keep the drive alive. Torrio’s PAT attempt was wide right however and Safford held a slim 20-14 lead. The teams traded empty possessions the reminder of the quarter and the Dogs lead heading into the 4th.

The difference in 4th quarter was Thatcher QB Jack Kortsen. All game long he’d been handing off to the running backs in the veer attack. In the 4th he started to pull the football that lead to big pick ups. Just one minute into the 4th Kortsen kept it himself and went untouched 70 yards for the Eagles TD. That score gave Thatcher their first lead of the game 21-20.

Safford battled in the 4th quarter but couldn’t come up with another big play that they found earlier in the game. Thatcher found their legs in the run game and pounded out a huge 4th quarter drive that was capped by a Brock Jones 5 yard TD run to extend the Eagles lead to 28-20 with 6:57 remaining.

Safford would get one last chance with just over 3 minutes left. Facing a 3rd down and long from their own 35 yard line Duros was sacked and injured. With his team facing 4th down and long, Head Coach Eric Hjalmarson, called on Jerick Arbizo at QB. He dropped back and had little time to throw and and was sacked to end Safford’s drive. Thatcher lined up in the victory formation and kneeled twice to come away with the hard fought victory.

Thatcher moves to 4-0 on the season and will host Benson Friday. Safford falls to a tough luck 0-3 and will travel to Show Low.