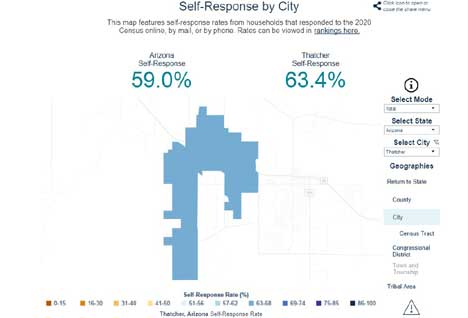 THATCHER — The Town of Thatcher continues to lead the Gila Valley when it comes to responding to the U.S. Census.

Thatcher residents’ self-response rate is at 63.4 percent to lead Graham County. Safford is right behind at 61.5 percent while Pima has shown tremendous growth and is now at 45.2 percent.

Countywide, the response rate is 52.4 percent.

Greenlee County has improved, but remains in the lower third of Arizona’s counties’ response rates. Countywide, Greenlee is at 36.1 percent, while Duncan is at 37.5 percent and Clifton is at 35 percent.

As a state, Arizona is at 59 percent, placing it 33rd in the nation. Minnesota has the best response rate at 71.8 percent and Alaska is the state with the lowest at 48.7 percent.