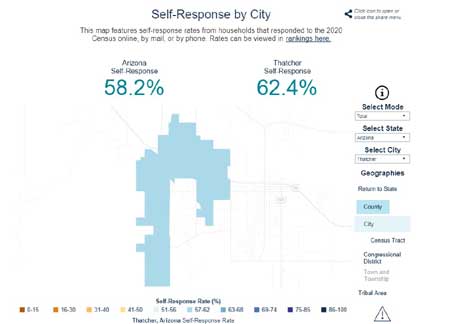 SAFFORD — Graham County has crossed the 50-percent mark when it comes to Census response rate.

That’s according to the latest data from the U.S. Census Bureau.

Thatcher has overtaken Safford when it comes to the best response are in Graham County. Thatcher has a 62.4-percent response rate while Safford is at 60.5 percent. Pima is at 42.9 percent.

Helping Thatcher achieve that rate is a give-away by the town, offering a chance to win a big-screen TV, a $500 gift card or an Apple iPad for proof of completing the Census.

Greenlee County is making progress, climbing from a 27.7-percent response rate June 5 to 34.1 percent as of Monday. However, it still remains the fourth lowest response rate in the state behind Apache (9.3 percent), La Paz 20.3) and Navajo (25.1) counties.

Duncan is at 35.6 percent response rate and Clifton is at 32.7 percent.