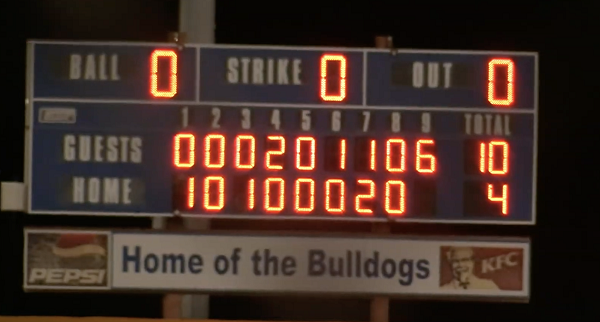 Thatcher completed the season sweep of Safford on the baseball diamond last night with a 10-4 win in nine innings.

Safford struck early in the 1st inning when Centerfielder Gunner Higgins singled off Thatcher starter Seth Lunt and scored Keegan McKinney from second after his double. The Bulldogs tacked on their second run of the game in the third inning when Alyxx Garcia scored on a Higgins sacrifice fly to centerfield. His 2nd RBI of the game to give the Dogs a 2-0 lead. Safford pitcher Justen Sanchez was dominate in his first start of the season after sitting out 50 percent of the season as a transfer. He threw 5 2/3 innings and only gave up 5 hits and 2 runs while striking out 8.

Thatcher scratched across their first 2 runs in the 4th inning as Jason Carrasco and Jacob Ward scored on a dribbler up the 1st base line by Treven Clark. They added a third run in the 6th inning a controversial call after a walk to Ernesto Lujan. Safford head coach Robert Abalos protested that Lujan never checked into the game and that run shouldn’t count, the umpires disagreed and gave Abalos an early exit. The Eagles scored again in the top of the 7th as Carrasco singled home Alek Verdugo, giving the Eagles a 4-2.

The Dogs were down to their final at bats when Noah Bevens led off the bottom of the 7th with a walk. Garcia and McKinney both reached on a fielders choice then Higgins drove a 3-1 pitch past a diving Ward at 2nd base to tie the game at 4 and send the game into extra innings.

Both teams made pitching changes in the 8th. Safford handed the ball to Garcia who sent the Eagles down in order in the 8th. Thatcher sent Jason Carrasco to the hill and he struck out the side to end the 8th.

The Thatcher bats came alive in the top of the 9th when they sent 10 hitters to the plate and pushed across 6 runs capped by a 2 RBI single by Carrasco. He then closed the door on Safford in the 9th sending them down 1,2,3 to get the win.

Higgins led the Bulldogs at the plate with 4 RBI. McKinney was on base 4 times going 3-4 with a double, 2 singles and 2 stolen bases.

Michael McBride was 3-6 at the plate for the Eagles with a double. Jacob Ward was 3-5 and scored 3 runs.

Safford will be on the road Friday at Pusch Ridge trying to stop their 5 game losing streak. Thatcher will host Willcox  on Friday.

The game was broadcast on YouTube courtesy of SBNN, the Safford High School Film & TV program. You can watch the full replay of the game here.