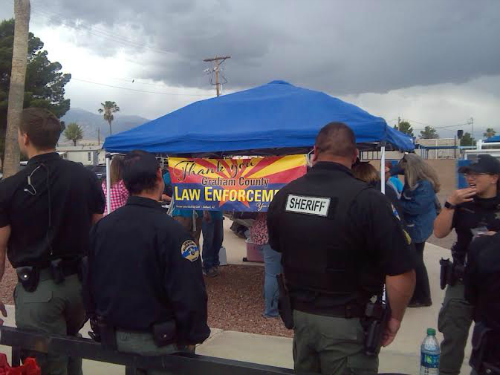 On Wednesday, May 18th, the community gathered together on behalf of National Police Week at firth park. The luncheon lasted from noon until one thirty. The event was sponsored by the Graham County substance abuse coalition. Everyone feasted on barbecued food while enjoying good company.

Recognizing the service and the sacrifice of the United States law enforcement, National Police Week always falls during the week in which May 15th falls.    In certain states, Police Week is celebrated by honor guard competitions, pipe and drum procession, survivors’ seminars, baseball games, and an annual candlelight vigil. Police Week was established in a resolution in Congress in 1962. It is a special recognition for those who lost their lives in the line of duty as police officers. However, it would be over twenty after the resolution passed before President H.W. Bush would dedicate the National Law Enforcement Memorial in 1991.

It is estimated, that every year the police officers suffer 6,0000 assaults nationally, resulting on the average of 16,000 injuries. Tragically,  statistic states that 146 police officers are killed yearly. So far this year, thirty-five police officers have paid the ultimate sacrifice that cost them their lives in the line of duty. Our hearts go out to their families, and as we live in our quiet Gila Valley we will be grateful for the officers who still keep watch. On  May 4th, 1969, President John F. Kennedy stated in his declaration, “I invite State and local governments, patriotic, civic, and educational organizations, and the people of the United States generally, to observe Peace Officers Memorial Day and Police Week in this year and each succeeding year with appropriate ceremonies in which all our people may join in commemorating law enforcement officers, past and present, who by their faithful and loyal devotion to their responsibilities have rendered a dedicated service to their communities, and, in so doing, have established for themselves an enviable and enduring reputation for preserving the rights and security of all citizens.”