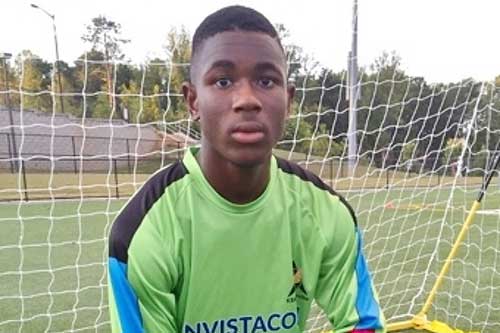 Georgia teen, Reuben Nsemoh, gave his parents the shock of their lives recently when he woke up from from a coma speaking only in Spanish — a language he’d never spoken fluently before.

As WSB-TV reports, the 16-year-old Parkview high school sophomore had suffered his third concussion after being kicked in the head during a soccer game. He was airlifted to Atlanta Medical, where he spent three days in a coma.

When he woke up, his parents said he was speaking fluently in Spanish. Days later, his English slowly returned and his ability to communicate in Spanish slowly faded.

Looking back now, Nsemoh told WSB Radio that he may have subconsciously recalled fluent Spanish conversations he overheard from his friends and brother.

“My friends would always talk to me in Spanish and would teach me,” he said. “I wasn’t perfect, but my brother is a really fluent Spanish speaker. So he kind of inspired me with that too.”

While his coach Bruno Kalonji called Nsemoh’s concussion one of the worst he’s ever seen, it hasn’t stopped Nsemoh from wanting to get back on the field.

“It’s my passion. It’s the one thing I want to do for my career,” Nsemoh explained.

And as he waits for his return, his parents have mounted a GoFundMe page to cover his rising medical costs.

One thing’s for sure — if and when he does come back, he’ll be wearing a helmet. Kalonji now believes all goalies need to wear one.

“This can happen even at practice,” he said. “And if kids already have two concussions or three, it’s recommended that they wear one.”