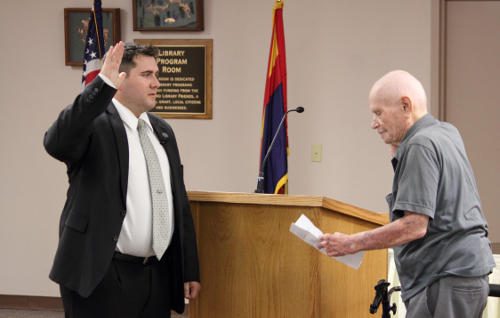 SAFFORD – Chris Taylor announced Monday he has resigned his seat on the Safford City Council following a relapse with substance abuse.

Taylor previously announced he had resigned his position with the Safford Volunteer Fire Department and ended his campaign for Congress following an incident involving heroin use and a confrontation with emergency medical technicians and Safford Police on Feb. 19.

“It has been the honor of my life serving the amazing citizens of Safford, the only home I’ve ever known. I’ve always worked tirelessly to be accessible and responsive to the constituents that elected me,” Taylor said in a prepared statement.

Taylor was discovered unresponsive by his wife Feb. 19 and she called 9-1-1. When the ambulance arrived, the EMT saw Taylor’s wife, carrying their infant child, run out of the house and call for help. The EMT saw Taylor exit the house, grab his wife and drag her back into the house.

The EMT – who is an off-duty police officer – entered the home and subdued a combative Taylor.

In his statement, Taylor claimed he was “unconscious” when he was violent.

“I won’t minimize one ounce of the traumatic experience I inflicted upon her, the love of my life. But until this unconscious incident, when I apparently pushed her to the side to get passed her in a narrow hallway and then moved her from the doorway to close the front door, I have never laid hands on my wife. I’ve never even yelled at her in six years of marriage. I have also never once been violent or physically hurt anyone. The fact that I might be facing charges of domestic violence against my sweetheart and eternal companion and aggravated assault on my good friend, the paramedic, is absolutely devastating. I would never hurt anyone much less two people that I love, admire, and care about,” he said in his statement.

After he was taken into custody. Taylor’s wife consented to a search of the home where a box that contained a substance that later tested positive for heroin was found. She also turned over recordings of Taylor allegedly injecting himself, recordings made when she set up a hidden camera after family finances started to go missing.

Taylor was transported to Mt. Graham Regional Medical Center for treatment and then released to the custody of his father, who took Taylor to Benson for detox and drug rehabilitation.

The Safford Police Report was forwarded to Graham County Attorney’s Office for possible charges. Gila Valley Central inquired Monday if charges had been filed and Attorney’s Office officials said, as of 12:45 p.m. Monday, that they had to “check” with others in the office who were not immediately available.

During tonight’s Safford City Council meeting, the council is sheduled to address the vacancy created by Taylor’s resignation. The council may seek aplications for the seat and then appoint someone to serve the remainder of Taylor’s term, which runs through December, or the council may opt to leave the seat open until this year’s municipal election.