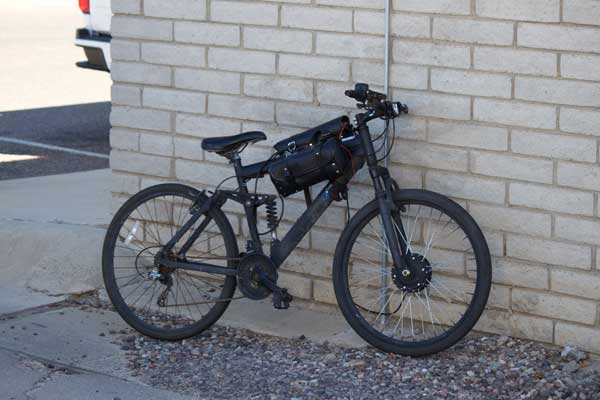 Jon Johnson Photo/Gila Valley Central: Safford officers responded to the empty building across the street from the Graham County Courthouse after a combat veteran thought this bicycle might have had an explosive device wired on it.

SAFFORD – In the days we are living in one can never be too careful. That emotion is what prompted Chris Taylor to call authorities and report a suspicious looking bicycle he saw by his office Wednesday morning.

Taylor, a decorated United States Army paratrooper combat veteran with two deployments to volatile regions of Afghanistan, is the executive director of Desert Eagle Addiction Recovery with an office at 616 S. 8th Ave.

After parking his truck along Court Street on his way in to work around 10 a.m., Taylor noticed a bicycle laying unattended against the old dentist building across the street from the Graham County Courthouse in the alleyway between Stewart Title and the Law Office building. The bicycle appeared to have some sort of contraption affixed to it with wires coming out that reminded Taylor of improvised explosive devices he had seen during his time in Afghanistan. 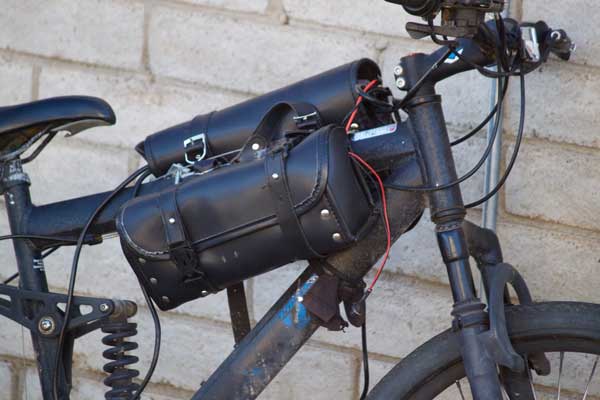 Jon Johnson Photo/Gila Valley Central: The wires coming out of this electric-assist motor reminded the combat veteran of IEDs he had seen in Afghanistan.

After not being able to get the image of the bike out of his mind, Taylor decided to inform the police of the suspicious bicycle.

A Safford officer responded to the scene but wasn’t sure if the apparent homemade device was an explosive.

Multiple investigators from the Safford Police Department and Graham County Sheriff’s Office then arrived at the scene. Safford Detective Glen Orr recognized the bicycle as belonging to a man he has had contact with in the past and believed the contraption was a set of batteries and motor to electrically assist the bicycle’s propulsion.

Orr theorized the owner likely had a court hearing to appear at and simply left the bike unattended across the street. He then opened the satchel and showed the electrical-assist motor to the other officers.

The investigators breathed a sigh of relief and then left the scene.