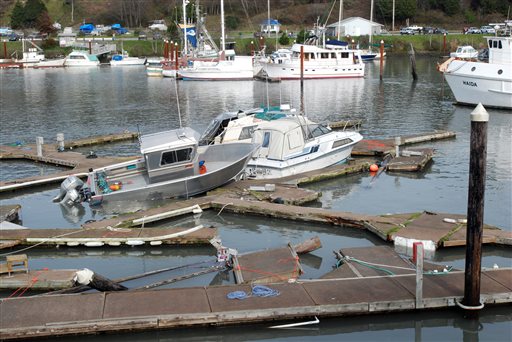 FILE - In this March 11, 2011, file photo, boats and docks float in disarray at the harbor in Brookings, Ore., after surges from a tsunami sheared off pilings and crumpled docks. Up and down the coast of the Pacific Northwest in the United States, communities have been intensifying their efforts to protect lives when the region is hit by a killer quake and tsunami, which seismologists say is inevitable. (AP Photo/Jeff Barnard, file)

PORTLAND, Ore. (AP) — Bracing for a tsunami like the one that devastated Japanese communities during a 2011 mega-earthquake, coastal communities from British Columbia to California have been grappling with how to protect people from a similar catastrophe.

One of those towns is constructing the nation’s first structure built as a vertical tsunami refuge.

Two years ago, voters in Westport, Washington and other communities in the school district approved a $13.8 million bond to build a new elementary school that would be reinforced to withstand a big earthquake and have a tsunami evacuation area on the gym’s rooftop.

“We have no natural high ground,” said Paula Akerlund, superintendent of the Ocosta School District, located on a peninsula, noting that they have 20-30 minutes between a quake and a tsunami to get to higher ground. That’s “impossible.”

The new school is being built on a small ridge, which will put the reinforced roof of the gym above the highest tsunami surge expected by scientists. It is expected to be completed in March.

The devastating 2011 earthquake and tsunami in Japan was a reminder of a mirror-image threat lurking just off the Pacific Northwest coast: a 600-mile-long fault that has not produced a major quake since 1700 but could do so any time. The fault is called the Cascadia Subduction Zone.

Progress has been incremental in the region as communities seek funding for expensive projects, examine the most effective means of protecting people and ponder how much they are willing to spend to prepare for a disaster.

A study by the U.S. Geological Survey and university researchers that was published this year shows that of the 94,870 people living in tsunami hazard zones in northern California, Oregon and Washington state, about 21,500 would not have time to reach higher ground if they walk slowly. That goes down to 16,000 if they walk quickly.

Nearly 70 percent of the residents at highest risk are in Washington state communities, followed by Oregon with 29 percent and California with 4 percent.

The state of Washington has identified the need for 55 vertical evacuation structures in low-lying coastal areas in three counties. The school gym in Westport will be the first to be built. The next may be a manmade berm in Long Beach capable of giving refuge to 800 people.

Emergency planners in California are looking into creating some sort of vertical evacuation structure on its northern coast — building a berm or perhaps fortifying an existing tall structure to withstand a big quake and serve as a tsunami refuge. A building would have to be on soil that would not be in danger of liquefying during a major earthquake.

Up and down the coast, officials have been trying to ensure that residents and tourists know how to quickly get to high ground by using designated tsunami evacuation routes.

Newport, on Oregon’s central coast, is turning a 90-foot-tall forested hill into a tsunami evacuation area. “Safe Haven Hill,” as its being called, will have lighted walkways to the top so evacuees can find their way at night.

Seaside, on Oregon’s northern coast, has some natural high ground for evacuees but it also has bridges likely to collapse during a big earthquake, cutting off escape to thousands of people.

Many coastal communities are strapped for cash, a factor in planning.

Even though Seaside is one of the most vulnerable communities on the Oregon coast, voters rejected a $129 million bond to move three schools to safer ground.

Federal money helped moved high school students out of the tsunami zone in Waldport, on Oregon’s central coast, into a new school on high ground. The old school was “smack dab” in the tsunami zone and “had some quake safety issues,” said Dennis Sigrist, Oregon’s hazard mitigation officer.

In Curry County, on Oregon’s border with California, voters two years ago approved a $10 million bond issue to replace an aging hospital that faced closure. The new hospital is going up on the same lot as the old one, in the city of Gold Beach.

Maps dating from the 1990s put the lot outside the projected tsunami zone. But newer maps show it could be swamped by a tsunami, depending on the severity and proximity of the offshore quake.

State emergency managers were alarmed by the site choice.

Jodi Fritts, city administrator for Gold Beach, said alternative sites on high ground are prone to landslides and costs would be prohibitive for putting in roads, sidewalks, and water and sewer lines, especially in a county as poor as Curry.

Fritts argued that with no one able to predict with certainty when the big quake and tsunami will come and how far the tsunami waters will reach, and with the community in desperate need of a modern hospital, going ahead was the right choice.

Chris Goldfinger, author of a study that concluded there is a 37 percent chance of the Cascadia Subduction Zone rupturing in the next 50 years, said he wishes decision-makers “would consider buying an airplane ticket to Japan and take a walk around the tsunami zone.”

“You have to go there … to really capture what destructive power means,” said Goldfinger, a professor of geology and geophysics at Oregon State University.