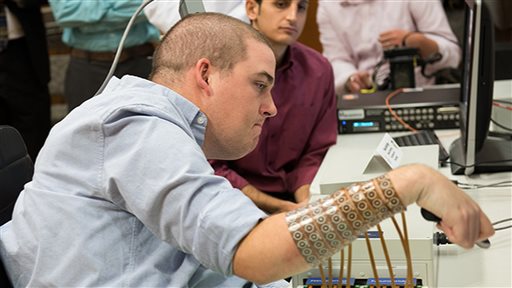 NEW YORK (AP) — A paralyzed 24-year-old man has regained some use of his right hand, controlling it with signals relayed from electronic sensors in his brain.

Ian Burkhart of Dublin, Ohio, can grasp a bottle, pour its contents into a jar, pick up a stick and stir the liquid. He can grab a credit card and swipe it through a reader. He can move individual fingers and hold a toothbrush.

But he can do these things only for a few hours a week, in a laboratory where he is hooked up to an experimental device that interprets his brain signals and stimulates his muscles with electrodes on his forearm. With improvements, researchers hope the system will eventually aid the everyday lives of people like Burkhart with spinal cord injuries, and perhaps others with stroke or traumatic brain injury.

If and when the device can be used at home, “it will really increase my quality of life and independence,” said Burkhart, who is paralyzed over most of his body.

Burkhart’s case is described in a paper released Wednesday by the journal Nature. It’s the latest report from research that has let paralyzed people operate robotic arms, computers and other devices with signals picked up by brain implants, or regain use of paralyzed muscles by sending signals from other muscles they still control.

In contrast, the new report demonstrates that a patient can use a brain implant to stimulate his own paralyzed muscles.

Burkhart was a college freshman when he broke his neck about six years ago. He dove into an ocean wave and was slammed into a sand bar. As a result, he is paralyzed from the middle of his chest down, with no use of his arms below the elbow.

For the experimental treatment, surgeons in 2014 placed a tiny device on his brain that includes 96 electrodes that penetrate just below the surface. It monitors a relatively small population of brain cells in the region that controls movement of his right hand, sampling the activity 3 million times a second.

“We’re really just eavesdropping on a few conversations between those neurons and we’re trying to figure out what they’re talking about,” said Chad Bouton, an author of the Nature paper who worked on the project while at the Battelle Memorial Institute in Columbus, Ohio. He is now at the Feinstein Institute for Medical Research in Manhasset, New York.

When Burkhart is in the lab, a cable is attached to a small projection from his skull to carry signals from the sensor to a computer, which interprets what movement he is trying to accomplish. Then it sends commands to an array of up to 160 electrodes strapped to his forearm. Electrical stimulation from those electrodes activates his hand and finger muscles.

“This is taking one’s thoughts and, within milliseconds, linking it to concrete movements,” said Dr. Ali Rezai, a study author and neurosurgeon at Ohio State University.

Burkhart said the stimulation feels like a slight tingle or buzz, noting that he has only a little sensation in his arm because of his injury. He also said his muscles tire after a while.

During the first few months, he became mentally worn out from concentrating on exactly what muscles he needed to move, he said. Now “it’s gotten much easier,” he said in an interview.

But if he faces a new task or one he has not done for a while, “I kind of have to think about it a little bit beforehand, and really think through what I’m trying to accomplish.”

Rezai said Burkhart is getting faster and more fluid in his movements as he and the computer system learn from each other.

Burkhart said he’d like to participate someday in testing a next-generation version of the system that could be used outside the lab.

Researchers said they hope to improve the technology by such steps as making the connections wireless, perhaps placing electrodes on or beneath the scalp rather than in the brain, and replacing the strapped-on forearm electrodes with implanted ones.

Experts who weren’t involved in the project said the results hold promise.

Lee Miller of Northwestern University, who has done similar research in monkeys, called the results “an important step” toward developing a tool for helping patients. He agreed that the forearm electrodes would probably have to be implanted, but he said the current approach is “clearly a good starting point.”

Chet Moritz of the University of Washington called the findings exciting. Direct stimulation of muscles can quickly lead to fatigue, he noted, but that might be avoided by stimulating the spinal cord to move the muscles instead.

P. Hunter Peckham, a professor of biomedical engineering at Case Western Reserve University in Cleveland, said the work is valuable in showing that a brain implant can be used to control several muscles at a time.

Peckham said many paralysis patients are already doing “impressively well” at home with a system that lets them stimulate hand movements with signals generated by other muscles. But the brain implant approach could be useful for people with more severe injuries who can’t control those other muscles, or who need a more complex signal to make particular movements, he said.

Follow Malcolm Ritter at http://twitter.com/malcolmritter His work can be found at http://bigstory.ap.org/content/malcolm-ritter