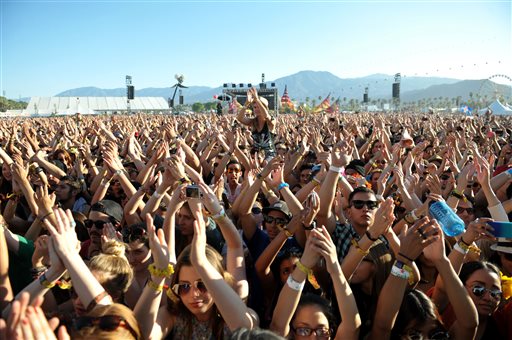 FILE--This 2013 file photo shows part of the crowd at the 2013 Coachella Valley Music and Arts Festival at the Empire Polo Club in Indio, Calif. Dubbed the Desert Trip, a classic-rock concert featuring the Rolling Stones, Bob Dylan, Paul McCartney, Neil Young, Roger Waters and the Who has been set for the desert site Oct. 7-9, 2016. Confirming weeks of rumors, Goldenvoice Entertainment announced Tuesday, May 3, 2016, it is bringing together the greatest musical acts of the 1960s and - well, really just the 1960s - for one three-day blowout in Californias Coachella Desert. (Photo by John Shearer/Invision/AP, File)

LOS ANGELES (AP) â It could be Woodstock 47 years later, only the drug of choice might be antacid, not that other stuff, at an October concert featuring some of the greatest rock acts of the preceding generation.

“I think everybody has a sense that this is going to be something historic, and I really don’t think that’s overblowing it,” said Chris Sampson, founding director of the popular music program at the University of Southern California’s Thornton School of Music.

Dubbed the Desert Trip, the three nights of music Oct. 7-9 will begin on a Friday with performances by Dylan and the Rolling Stones. They will be followed the next night by McCartney and Young, with Waters and The Who closing out the weekend on Sunday.

Each act will perform full, separate sets with the shows beginning at sunset.

It should be noted that the average age of the four core members of the Rolling Stones is 72. Dylan will be 75 by show time. McCartney is 73, and Waters 72. The event’s youngest headliner (named, appropriately enough, Young) is 70.

That’s led some, such as Youth International co-founder Paul Krassner, to quip that the event should be called Geezerfest. Krassner is 84 himself and watched The Who play in 1969 at the Woodstock Music and Art Fair (where people were warned not to take the “brown acid”).

“I would love to be there except I now need a walker to get from one room to another,” he said.

Sampson expects every act to deliver and says anyone who has seen Dylan or the Stones or any of the others knows they pretty much still do. Every night. And on the nights in Coachella, their legacy will be on the line.

So why are they doing this? Besides, of course, for the obvious reason: Money.

“I would imagine that this is going to be very lucrative for everybody,” Sampson said, laughing. “But I’m also thinking they’re motivated, at least in part, by being part of something special.”

The next question is who will go.

It might draw comparisons to Woodstock, but it’s unlikely any Baby Boomers will be sleeping in the mud this time, even if it does rain. And there will be no need for any boomers flush with 401(k) money to hitchhike for miles.

For a bit more than $5,000, people can purchase a three-night stay at a high-end hotel, passes to the shows, shuttle service to and from the venue, meals and perks. There is reserve seating and bleacher seating for anyone whose days of standing up or dancing nonstop at a concert are over.

For those who want to camp, there are tents.

For those who just want to see the show, one-day passes are $199, with three-day passes costing $399. Sales begin Monday.

Sampson expects a good deal of the audience to skew older but adds people shouldn’t be surprised to see young people in the crowd.

The annual Coachella Valley Music and Arts Festival is packed each year with younger indie bands, but legacy acts like McCartney, AC/DC and Steely Dan have also fared well at the shows.

What’s more, Sampson, who teaches music classes to people in their 20s, says Baby Boomers would be surprised at how much admiration Millennials have for songwriters such as Dylan, McCartney, Mick Jagger, Keith Richards and the others.

“People in their early 20s, they find it a really amazing experience,” he said about hearing that music for the first time. Some, he said, react the same way they do when they first hear Mozart.