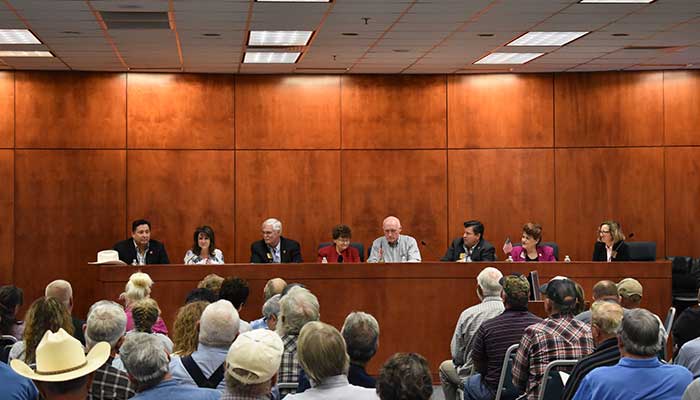 Safford – State congressional leaders held a public meeting Friday to hear from local constituents about proposals to meter well water. The General Services Building Assembly Room was filled to capacity with some people standing in the doorway.

Farmers, ranchers and other concerned citizens voiced their opposition to the proposals and expressed other concerns about water rights. Graham County Cooperative Extension Director, Bill Brandau told the panel that metering wells might seem like a good idea now, but will likely become onerous in the future if the proposals go through. Brandau referred to himself as a ‘recovering bureaucrat,’ after retiring from the BLM. Brandau pointed out that it took 15 years to get improvements to the canal diversion on the Gila River because of regulations. Brandau told the panel that many wells are already metered by the irrigation district and water users on that system are limited to 6 acre feet.

The collective sentiments of those who commented was that they did not want people in metropolitan communities dictating how much water ranchers and farmers in rural areas can use. Some comments were centered on lawsuits local farmers and ranchers are facing from the San Carlos Apache Tribe regarding water rights. The panel members expressed their support for rural water rights. Senator Griffin said that the proposals in question were submitted without any consideration of rural areas of the state. The panel has been meeting with constituents around the state. So far meetings have been held in Yuma and Casa Grande and have filled to capacity. Other communities have requested a meeting in their areas to voice opposition to the metering proposal.