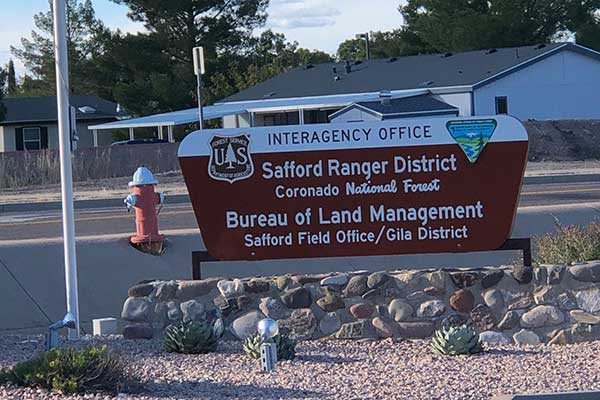 SAFFORD — Arizona Department of Forestry and Fire Management, the Bureau of Land Management and the Bureau of Reclamation have announced that Stage 2 fire restrictions will begin Tuesday, May 12, on public lands.

On BLM and BOR operated lands, restrictions include:

• Building, maintaining, attending or using a fire, campfire, charcoal, coal or wood stove (Propane and pressurized liquid or gas stoves, grills or lanterns that include shut-off valves are permitted when used in an area of at least six feet or more cleared of flammable material such as grass and brush)

• Smoking, except within an enclosed vehicle or building

• Welding or the use of any torch, metal cutting or grinding equipment

• Operating any internal combustion engine, such as a chainsaw or similar power tools

• Discharging a firearm except while engaged in a lawful hunt pursuant to state, federal or tribal laws and regulations

• Using fireworks, exploding targets, and incendiary devices, which are prohibited year round.

Arizona Department of Forestry and Fire Management adds that recreational target shooting is also prohibited on state lands year round.

The agencies also suggest homeowners take precautions to protect their homes in the event of a wildfire, including raking up dead leaves or needles, pull weeds and mow lawns, trim trees, and move anything that will burn away from the home.

Also recommended is creating a buffer between the home and trees, shrubs, undeveloped spaces or other wildland areas, as that is essential to improving a home’s chance of surviving a wildfire.