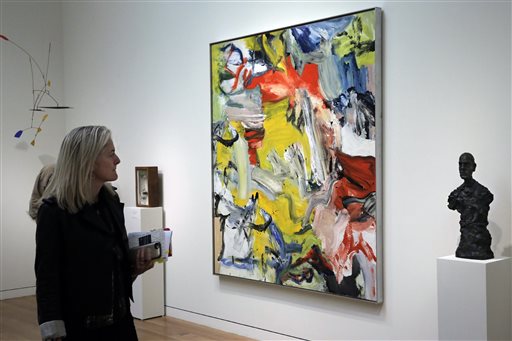 NEW YORK (AP) — It’s that time of year when deep-pocketed collectors go looking for blue-chip works of art. None is expected to beat the $179 million paid for a Pablo Picasso in the spring, but there’s no shortage of multi-million dollar impressionist, modern and contemporary works coming up at auction in the next several weeks.

Sotheby’s opens the fall art auction season on Wednesday with works from the renowned collection of its late former owner, A. Alfred Taubman. The next day, it returns with other masterpieces including a stunning landscape by Vincent van Gogh that could realize as much as $70 million.

Experts say the prices are driven by artworks’ investment value and wealthy collectors seeking out the very best works.

“There are apparently vast sums of money swimming around the world and with interest rates so low, few places to park it,” said Manhattan dealer and collector Richard Feigen.

A painting by Frank Stella would set a new auction record for the artist if his “Delaware Crossing” reaches the pre-sale estimate of $8 million to $12 million. The current Stella record is $6.6 million.

Remaining works from the 500-piece Taubman collection will be offered in three other dedicated sales, on Thursday, Nov. 18 and Jan. 27. The collection could fetch a total of $500 million. The proceeds will be used to settle his estate’s tax obligations and fund a foundation.

Sarah Lichtman, assistant professor of design history at Parsons School of Design, called it “a veritable stroll through an art history textbook.”

Taubman, who died in April at age 91, is credited with transforming Sotheby’s into a global powerhouse during his 17-year tenure. But his reputation was tarnished in 2001 when he was convicted in a price-fixing scandal while chairman of Sotheby’s. He spent nine months in prison.

On Thursday, Sotheby’s is offering seminal works from other collections, including by Kazimir Malevich, Picasso, van Gogh and Claude Monet.

Van Gogh’s “Landscape Under a Stormy Sky,” created a year before his death, could bring $50 million to $70 million. The current van Gogh auction record is $82.5 million.

Malevich’s “Mystic Suprematism (Black Cross on Red Oval)” is poised to fetch up to $45 million. The 1920-1922 painting was given to the artist’s heirs after residing in the Stedelijk Museum in Amsterdam for 50 years.

A nude portrait from Picasso’s Blue Period, “The Nightclub Singer,” is estimated to sell for $60 million. The work has the added allure of having a second picture on the reverse side, a discovery made during a 2000 conservation. It depicts a bawdy picture of Picasso’s dealer, Pere Manach, and includes an inscription indicating it was intended as a gift to him.

The seller is billionaire businessman William Koch, a 1992 America’s Cup winner and brother of conservative political donors Charles and David Koch. Koch also is selling a 1908 “Water Lilies” painting by Monet that could fetch $30 million to $50 million.

Next week, Christie’s offer its impressionist, modern and contemporary artworks. Among the centerpieces are a seductive nude portrait by Modigliani that could set a new auction record for the artist if bidding soars to $100 million as the auction house predicts. A portrait by pop artist Roy Lichtenstein also could set a new artist auction record if the work reaches the pre-sale estimate of $80 million.

On Nov. 11, Sotheby’s evening contemporary art sale includes Cy Twombly’s “Untitled, 1968 (New York City).” It could fetch over $60 million. The painting, from the collection of philanthropist Audrey Irmas, is being sold to help fund a new Los Angeles synagogue.

Another highlight of that sale is Andy Warhol’s “Mao,” created in 1972 and the pop artist’s earliest silkscreen iteration of China’s former chairman Mao Zedong. It has a pre-sale estimate of $40 million.