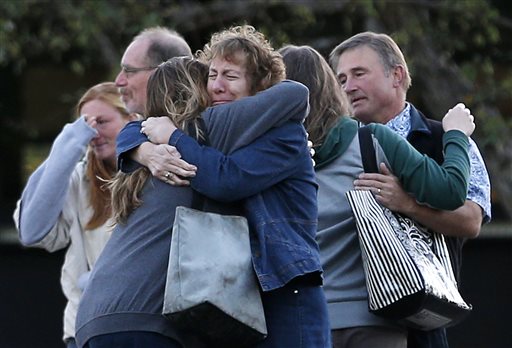 Faculty members embrace as they are allowed to return to Umpqua Community College Monday, Oct. 5, 2015, in Roseburg, Ore. The campus reopened to faculty for the first time since Oct. 1, when armed suspect Chris Harper-Mercer killed multiple people and wounded several others before taking his own life at Snyder Hall. (AP Photo/John Locher)

ROSEBURG, Ore. (AP) — Some faculty, staff and students embraced or brought flowers to a makeshift memorial Monday as they returned to an Oregon community college for the first time since a gunman killed eight students and a teacher.

Although classes do not resume until next week, the campus reopened to students and staff, some of whom picked up belongings they left behind when they fled the shooting Thursday. Journalists were not allowed onto the campus in the small town of Roseburg as grief counselors prepared to help people cope with the tragedy.

Some who returned hugged on campus and in the parking lot. A memorial was growing on the driveway leading to Snyder Hall, where 26-year-old Christopher Harper-Mercer executed nine people inside a classroom and wounded nine others. He killed himself after a shootout with police.

“It was hard not to focus on Snyder Hall,” student Joel Mitchell said. “When we got back, I think a lot of people were probably … looking at it, checking it out, seeing what it looked like.”

The building could be seen from the roadway, surrounded by a fence wrapped in black tarp.

“I needed to be here,” said another student, Madysen Sanchez. “I needed to come and see my friends, make sure they’re OK.”

She said coming back after the shooting was emotional.

“You never think that something like this could happen in such a small town,” Sanchez said. “And when it does, it just brings us all together.”

Chaplains who had been on campus said they were both helping with and participating in the healing process.

“I’m going through the grieving process myself because this has touched everyone in the community,” chaplain Russell Wilson said. “If you don’t know someone that goes here, you know someone that knows someone.”

A day earlier, Roseburg residents packed churches to hear Sunday sermons in which pastors talked about the tragedy and sought to help people deal with it.