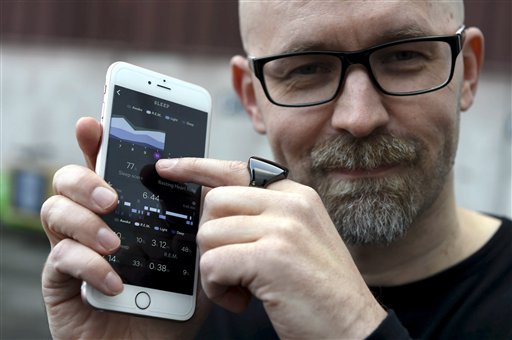 Kari Kivela, head of design at Ouraring, promoting a "wellness" ring at the Slush 2015 event in Helsinki, Thursday, Nov. 12, 2015. Slush is the focal point for startups and tech talent to meet with top-tier international investors, executives and media. (Jussi Nukari /Lehtikuva via AP) FINLAND OUT

HELSINKI (AP) — After the smartphone and fitness bracelet, here comes the smart ring. And the smart pacifier, and smart rollator.

“Wellness” computers that monitor your pulse, temperature and other health indicators are becoming increasingly sophisticated and varied to cover every aspect — and age — of human life.

Some products, like the ring by Finnish startup Ouraring, are specialized in optimizing physical training by tracking sleep patterns and physical activity. Others are looking to fit into health care services, such as in developed countries that are struggling to cope with aging populations.

Health gadgets took the limelight at this week’s Slush fair, a gathering of technology startups that has drawn 800 investors and an estimated 15,000 participants worldwide.

Lasse Leppakorpi, the founder and CEO of Beddit, a startup specializing in sleep-monitoring equipment, says new gadgets will increasingly change the role of doctors to becoming “consultants and experts” for people concerned about their well-being.

“The focus of health care will shift from treating illnesses more toward responsibility of caring for one’s health,” he said at the Slush fair, featuring a record 1,700 startups.

Earlier this year, the Technical Research Center of Finland launched a digital maternity package complete with pacifiers that can monitor babies’ sleep, well-being and physical development. It has now turned its sights to the other end of the life curve — to smart rollators for the elderly, retrofitted with sensors and digital software to analyze users’ physical condition and daily activities.

Jyrki Kasvi, a Green Party lawmaker, sees benefits to both governments and companies.

“This is an extremely important field, both for the technology side and for health services. In the future, there’s no way we’ll be able to afford having people running from lab to lab to be tested and measured if we can monitor them with gadgets.”

The startup scene is particularly important for Finland, which is in its fourth year of recession and is keenly trying to fill a hole in the economy left by Nokia, the former top cellphone maker that sold off its ailing handset business.

The Finnish Funding Agency, which helps companies with perceived potential to develop and compete abroad, considers health and well-being a key sector.

“This may not replace Nokia but it certainly complements Nokia’s achievement,” said Mirja Kaarlela, the agency’s director of health and well-being. “Nearly everyone involved in the digital health sector uses the knowhow created by Nokia in health and fitness wearables.”

The Slush event, which began with a few hundred participants in 2008, has grown steadily. This year, investors are coming from as far away as Australia to look for opportunities.

Nicholas Young from Otsana Capital, based in Perth, Australia, said the “mood is very energetic and positive,” but declined to name any potential investment targets.

“There’s been an increase in the number of tech health care transactions that have come into the Australian market,” he said. “That’s a massive sector and a huge valuation that can be attributed to something that’s quite simple but can save governments and health organizations around the world lots and lots of money … and keep us living for longer.”

The maker of the smart ring, Ouraring, believes it has an advantage over companies providing only sleep-monitoring equipment, such as smart beds equipped with sensor straps under bed sheets.

“Our rings monitor when you’re asleep, when you’re awake, if you’re sitting, when you’re on the move,” said Kari Kivela, head of design at the Finnish company based in the city of Oulu, a former Nokia hub.

The app analyzes the quality of rest and recovery by measuring the data from heart and respiration rates, body temperature, and body movement. During waking hours it monitors the duration and intensity of activity and time spent sitting.

On Thursday, the company announced it had secured $2.3 million in funding, mainly from U.S investors, on top of $650,000 raised in an international Kickstarter campaign in September with more than 2,000 backers.

The ring comes in several sizes but only two colors — black and white — and looks like a plastic signet ring.

Made of a scratch-resistant ceramic compound, it slides easily onto the finger, and seems unobtrusive and light to wear. But it doesn’t come cheap, with a price tag of 299 euros, increasing to 329 euros after the funding campaign ends.

Many smart watches and bracelets measure similar activities, but Kivela says that rings are more reliable because they fit firmer onto fingers than bracelets, which tend to be disturbed by wrist movements.

“Savvy consumers would rather wear their nice Swiss watches than plastic monitoring bracelet,” Kivela says. “The ring does the monitoring instead.”