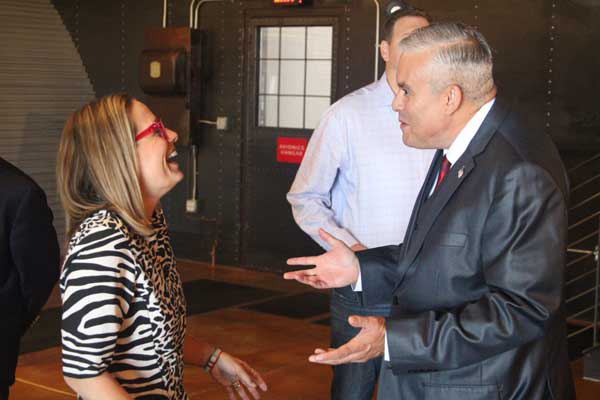 SAFFORD — U.S. Sen. Kyrsten Sinema, D-Ariz., flew into Ponderosa Aviation at the Safford Airport on Tuesday, to conduct a round-table meeting about what this part of the state needs.

“My number one goal for today was to hear from community leaders in Graham and Greenlee counties about what their infrastructure needs are,” Sinema said. “One of the things we’ve experienced, in the time I’ve served in the Senate, is that big cities tend to get a lot of access and a lot of attention from the federal government, but smaller and more rural communities have a harder time breaking through. My goal is to ensure that every single dollar that Arizona is eligible for in the new infrastructure law is accessed by rural Arizona.”

The big issues for most around the table were water and roads and Sinema offered two suggestions — first was to work together on a regional basis as much as possible, and to use her office to help with the process of applying for federal funding, since few rural communities have staff with expertise in the federal grant process.

She also mentioned an additional $4 billion coming to the seven Western basin states that she said would be best utilized by the states working together to find a way to conserve 2- to 4-billion-acre-feet of water. To that end, she suggested a combination of short-term conservation goals and strategizing on long-term solutions to declining water sources during the ongoing drought.

There was also discussion about keeping higher education costs low, with EAC President Todd Haynie suggesting that, instead of forgiving student loans, the Pell Grant program be expanded, which would help more low- to moderate-income students.

Graham County Supervisor Danny Smith asked for Sinema’s help in getting the San Carlos Apace Tribe to the negotiating table in order to find a solution to the ongoing battle over Gila River water, while Clifton Mayor Luis Montoya talked about his town’s inability to pay to replace the crumbling wastewater system.

“The number one thing I hear in rural Arizona is their wastewater treatment and sewage,” Sinema said. “In almost all of rural Arizona these are antiquated systems that are in desperate need of repair, and I want to make sure that we’re helping them get access to the dollars they need to upgrade their systems.”