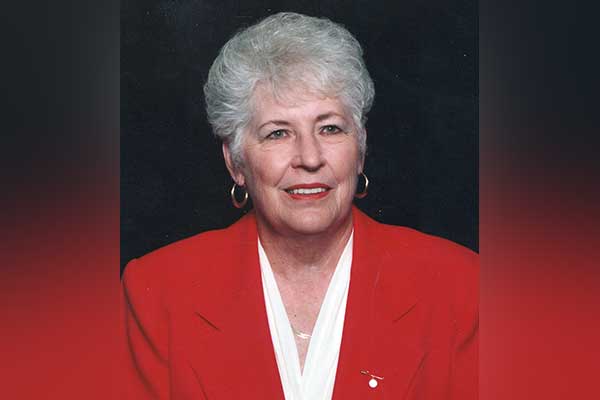 Shirley Angle Evans joined her loving family & friends in the “Afterlife Lounge” following 88 years of fun & a most interesting life.  Shirley passed away May 1, 2022, due to Ovarian Cancer under the wonderful care of The Eden Hospice.  She was born to Kenneth & Orene Moore/Fletcher on December 3, 1933, in Maverick, Texas.

Their family moved to Ft. Thomas, Arizona where she went to school through the 7th grade. The family then relocated to Pima, Arizona where she graduated from high school in 1951. Shirley started nursing school at Memorial Hospital in Phoenix but dropped out.

Shirley married Melvin Angle in Lordsburg, New Mexico. They are the parents of 3 children, Mark, Sam, and Kathy.

Shirley worked as office Manager for the Safford Inn Hospital for several years until she went to work for the Graham County Board of Supervisors, first as a secretary & later as Clerk of the Board.

Loving politics & being a staunch Democrat, Shirley decided to be a candidate for the Office of the Clerk of the Court.  Her husband, Melvin Angle told her if she lost, she would be driving trucks for Angle’s Trucking, well she lost.  In the early 70’s there were very few lady truck drivers.

Sam Angle, her father in law, took her to Phoenix, bought her a new Peterbilt truck.  The race was on. If Shirley passed another trucker, they had to see who was fastest.  Didn’t take long for Shirley to find out, “you can’t outrun an airplane”.   Slow down time.

Shirley was appointed as Graham County Recorder in May 1978, to fill the unexpired term of Lyle Grant.

Shirley & Melvin Angle divorced in 1987. In 1990, she married Loy Evans, father of four children, which made a big happy family.

Shirley & Loy loved dancing, a lot of the time the crowd would stop just to see them Waltzing.

Shirley retired as Graham County Recorder in 1998, and the Board of Supervisors appointed Wendy John to take her place.

Shirley & Loy traveled in their motorhome where they met a lot of new friends. They started fishing at San Carlos Lake. You could find them from September 1st until it got too hot at the lake.  Then off to Alpine, Arizona or White Signal, New Mexico. Sometimes it was Colorado to visit their friends.

She was preceded in death by her parents and her sister Betty Bowman.

When tomorrow starts without me & I’m not here to see, if the sun should rise and find your eyes filled with tears for me, I wish so much you wouldn’t cry, the way you did today, while thinking of the many things we didn’t get to say.  I know how much you love me, as much as I love you, and each time you think of me, I know you will miss me too.  When tomorrow starts without me, don’t think we’re far apart, for every time you think of me, I’m right there in your heart.